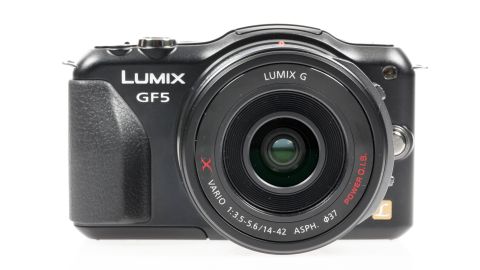 Panasonic has seen great success with the Lumix GF3, with its small size and beginner-friendly user interface appealing to a wide variety of users. So how does its successor, the Panasonic Lumix GF5, shape up?

Aimed pretty squarely at novice shooters rather than enthusiast photographers, the Panasonic GF5 manages to pack some pretty serious punch into its ever so small body.

Panasonic claims that its all-new 12 million pixel sensor is capable of delivering the same image quality as its bigger brother, the 16 million pixel Panasonic G3.

Making an appearance just 10 months after the debut of the Panasonic GF3, not only does the Panasonic Lumix GF5 offer an improved sensor, but it also includes a new Venus Engine for fast performance, a redesigned user interface and some new filters and effects.

Ergonomics have been slightly reworked, with metal buttons replacing the plastic ones found on the Panasonic GF3, and the handgrip from the more advanced Panasonic Lumix GX1 being attached to the camera.

The new Venus Engine has enabled Panasonic to push the sensitivity capability up to ISO 12800, meaning that this compact system camera (CSC) has the potential to perform better in lower light situations. It's also capable of shooting at up to four frames per second.

Panasonic is maintaining its "world's fastest autofocus" claim for the Lumix GF5, coming in at a speedy 0.09 seconds.

Panasonic also says that it has recently commissioned some independent research that shows its AF precision, along with speed, is beating all of its rivals, both in the CSC arena and in the DSLR market.

A 920k dot touchscreen has been included on the Panasonic Lumix GF5, another feature that has been brought across from its predecessor. Full HD video - pretty much a prerequisite on most modern cameras - can be found too.

Because the camera's main target audience is beginners, Panasonic has really ramped up its efforts to appeal, with the inclusion of new scene modes, filters and on-screen tutorials and explanations of modes.

This camera is a direct replacement for the Panasonic GF3, and as such the previous model has now been discontinued. Panasonic expects GF3 stock to last until around June (in the UK).