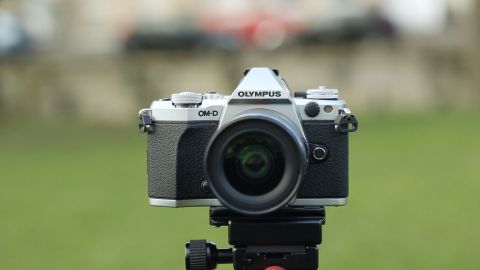 The E-M5 Mark II is incredibly powerful and versatile yet small and light too. Olympus has introduced some very interesting technologies with real, practical value.

Most significantly, Olympus has addressed the issue of noise appearing in some High Res Shot images. We did notice this if there was some movement in the subject between frames.

Olympus has improved the speed at which information is displayed when you first switch the camera on. The third enhancement is to audio added to movie files created with the My Clips editing feature – the audio can now be faded in and out.

The Olympus OM-D E-M5 was the first camera in Olympus's OM-D line of Micro Four Thirds compact system or mirrorless cameras, and hence it is sometimes referred to as the original OM-D. Its built-in electronic viewfinder and more SLR-like design distinguished it from the Olympus Pen series of compact system cameras. It was also aimed at more experienced photographers than the Olympus Pen or Pen Lite.

As the name suggests, the Olympus OM-D E-M5 Mark II is the replacement for the original E-M5 and it sits between the top-end OM-D E-M1 and the lower-level OM-D E-M10 in the Olympus range.

The E-M5 II uses a slightly modified version of the Four Thirds type (17.3 x 13mm) sensor in the original E-M5 but the effective pixel count remains at 16.1 million. It is coupled with the TruePic VII processing engine of the E-M1.

The new camera brings a small collection of significant upgrades on the original model. For many the most important of these is its ability to create 40 million pixel JPEG images or 64Mp raw files automatically in its High Res Shot mode. It does this by taking a sequence of 8 images in quick succession and using the upgraded Image Stabilizer to shift the sensor by a tiny amount between shots. The camera then combines these images into a 40Mp composite.

Olympus is working on speeding up the process of producing these high-res images, but for now it takes around 1 second to capture the images and 2.5 seconds to merge them together. This makes the High Res Shot mode a tripod-only feature that's designed for use with motionless subjects.

It's worth noting that although the original E-M5 has an excellent 5-axis sensor-shifting image stabilisation system, Olympus says that this has been improved for the Mark II camera. The manufacturer claims that it offers an extension in the safe hand-holdable shutter speed of up to 5EV. That's the difference between 1/500sec and 1/15sec.

Despite their close connection, both Olympus and Sony are adamant that they use their own stabilization systems and the stabilizer in the Sony Alpha 7 II is not the same as the one in any of Olympus's cameras.

Another significant upgrade brought by the Mark II camera is the introduction of a vari-angle screen. In the past Olympus has favoured tilting screens, so this is a significant step forward that makes it easier to compose images at a range of angles in upright or landscape format. As before, the screen is touch-sensitive and measures 3-inches across the diagonal, but its resolution has been boosted from 610,000-dots to 1,037,000-dots. However, it's an LCD rather than an OLED screen.

Next Page Video and exposure innovations