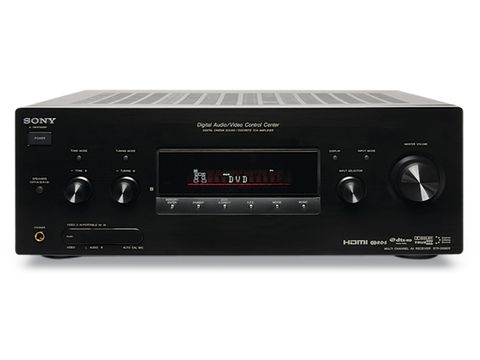 Fails to make much of an impression with its clinical performance, but this receiver wins us over with its user-friendliness

By the time you have untangled a rival's mic cable the Sony will be up and running and have you half way through Resistance: Fall of Man, searching for Chimera to beat up with your burgeoning arsenal of weaponry.

From box to pressing Start, the STR-DG820 is sub one-minute and the automatic test tones, being musical rather than white noise, are rather easy on the ear.

Okay, it's not exactly bristling with features or analogue connectivity, no S-video for example, but four-in, one-out HDMI connectivity leads the pack in numbers and the remote is best-in- class.

On the missing list is anything remotely resembling an onscreen display, Sony apparently preferring to use the front display and saving a few shekels by not bothering with video generating silicon. Operationally, the learning curve is like the north face of Everest, but with day-to-day use it gets easier and easier.

Sony has a home advantage when working with the PS3, and it makes the most of the synergy, too. The mood-setting scenes in Fall of Man are full of detail and ambience, creating a seamlessly solid and immersive experience.

The STR-DG820 is certainly no overblown power-house, offering 70W with all channels driven – it always errs on the side of reﬁnement above bludgeoning effects. Then again, when you are simultaneously unloading the canon and machine-gun of your M12 tank, do you want to critique the acoustic accuracy
of the weaponry's ballistics or really feel those Chimera exploding?

This detailed demeanour pays big dividends with movies. Fine detail and accurate spatial information emerge from the speakers in spades.

The dialogue is natural without any chestiness and only a restricted soundstage stops the DG820 being the home cinema bargain of the decade; as the bullets ﬂy around the Floston Paradise spaceship in Fifth Element, you can place every one in the scene. However, the 'boom!' in the ballroom never really lives up to its billing as the largest indoor explosion ever created in a movie.

And there's the hitch: subtlety, reﬁnement and detail are desirable attributes for a home cinema amp pressed regularly into serious thrillers, dramas and chick ﬂicks, but for action movies and games, I simply want more blood and thunder than the Sony STR-DG820 can offer. Call me shallow.