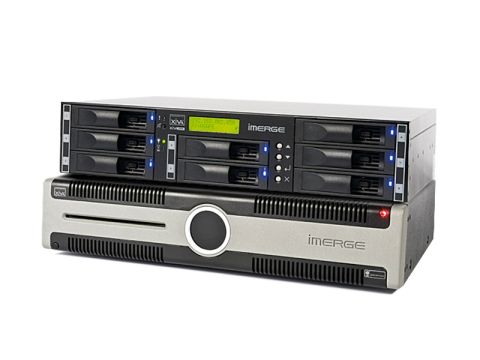 The Imerge MS1-HD represents the current pinnacle of the media server market. It's intended as a direct challenger to the Kaleidescape system which has been a consistent hit with custom installs, trumping it with extra features and functionality including the ability to rip Blu-rays.

The system is (initially) a two-box proposition. Content is stored on the XiVASafe hard drive array. You can choose how much storage and protection you want. Options typically vary from 3TB to 12TB, although it is infinitely scalable. Note that the XiVASafe unit is usually hidden away in a rack in a boot room, not in your viewing space.

The MS1-HD can't be used with an inexpensive off-the-shelf NAS, although it will run from an external eSATA drive. One obvious consequence of this is that you are locked into the Imerge storage ecosphere, which has a somewhat rarefied atmosphere. The company would argue that a solid benefit is that it's the equivalent of placing your content under rigorous protection.

The MS1-HD is what sits in your living room. It's relatively large, sounds like a well-behaved PC and has a slot-loading drive for ripping media. At its simplest, this hooks up to your AV system via HDMI and talks to the XiVASafe over Ethernet. You can then add additional, smaller client boxes in other networked locations. Seven simultaneous streams are currently supported from the XiVASafe.

The unit ships with a standard remote, although I suspect many would prefer to control their systems via iPhone/iPod Touch. An Imerge Controller app is available from the iTunes store.

Not just another jukebox

The joy of the MS1-HD is its interface. The gorgeous hi-res cover-art grid for music and movies is seductive and very intuitive to use. It's similar to what you would see using YAMJ (Yet Another Music Jukebox) but with much more polish.

This interface sits on top of the standard Imerge admin UI, which I suspect you'll use a lot, editing details of your media. Thankfully, it's fast and easy. At the heart of the ripping process is the unit's ability to sort metadata and grab cover art.

To challenge the ability of the MS1-HD to correctly identify ripped video media, I loaded 20 discs (DVD and BD) from my collection at random. Only around half were correctly tagged. This may say more about my own collection than the MS1-HD, though.

There's something satisfying about ripping discs. Once you've moved your favourites to a server, you'll start to search nooks and crannies for other discs long forgotten. And once you've got your stuff online, it's easier to browse. This is the case with both music and video. Pawing through shelves of CDs is a time-consuming solo chore, whereas viewing the same number of discs via a gallery on a TV takes a fraction of the time and is more of a social experience.

The MS1-HD allows you to rip a CD in a variety of compression modes and formats (MP3 up to 320kbps, WAV, or WMA up to 128kbps). Once ripped, albums or tracks can be played individually or put into a Play Queue. You can also access your music collection via iTunes, making transfer to iPod relatively straightforward. Video discs aren't compressed during the process. What you get is an ISO copy, complete with menus and extras.

The value of video on a server is slightly different from CD, in that it's less likely to get repeated play. There are perennial favourites when it comes to movies, but for the most part, films appear on a server and stay there until everyone is done with them. Yet I still have discs sitting on shelves in shrink-wrap years after buying them, and ripping these is like releasing friends from captivity. Once backed-up, video content can be displayed by title, genre, director or year.

The MS1-HD is the first unit for the dedicated server market that will also rip Blu-rays. It can't do this out of the box, although your dealer will be able to enable this. Within AACs copyright control protocols, there is a provision for moving content onto a home server. Called Managed Copy, it authorises disc owners to download HD file copies for personal use. This has yet to be implemented by either Hollywood or the major CE companies. The fudge employed here is an effective workaround.

The size of the average BD disc means that the ripping process is longer, around two hours, and there's a significant penalty on storage space. With a 12TB XiVAsafe, you can still only store around 300 Blu-rays. This compares to 1,800 DVDs. As with DVDs, pick the cover art from the gallery and the title loads and plays. It's just as if the platter was there, with caveats.

Firstly, BD-Live doesn't function. More significantly, the MS1-HD can't bitstream out high-res DTS HD MA or Dolby TrueHD audio tracks. You'll get DTS or DD 5.1 instead. Neither can the MS1-HD internally decode HD audio to multichannel PCM. Imerge's Head of Future products, David Reynaga, tells me that later this year a new client for the MS1-HD will be launched which will resolve this. smaller, quieter, and able to bitstream HD audio, it will join the MS1 family and create new system configurations.

Moving the main MS1-HD out of the viewing room in favour of a new, silent client strikes me as no bad thing. As you might imagine, you can pull music from the ripped music folder to other devices, although you can't move other music files into it. These have to be accessed via an Import folder. The ripped video folder, however, is inaccessible.

As I continued to use the MS1-HD, I began to long for more functionality. Not because it's lacking as it is, but because I wanted more reasons to stay within its walled garden. I have a large collection of video files in a variety of formats (MKVs, AVI, DiVX etc) and it would be terrific to integrate these within the graphical environment of the server. Using .nfo files and standardised naming structures, it should be possible to identify and tag all sorts of errant video content. As it stands, I need to use another device to access these.

I'd also like to see a visualiser when playing music. The MS1-HD has the high-res chops to do it, so why not? What's in Store? Intriguingly, unlike other server products, the MS1-HD has aspirations to become a general entertainment hub for the home.

Moving beyond a role as mere content repository, it's the first device to provide access to the new XiVA Music store. From within the MS1's GUI, you can enter this digital download outlet and browse for artists and albums. Produced in conjunction with 7digital, the media distribution company part-owned by HMV, the store offers around 8.5million tracks in DRM-free 320kbps MP3 format.

The user interface is peerless, cleverly using metadata to encourage you to branch from one artist/genre to another. Tracks can be previewed at 192kbps as you go; these last between 30 to 50 seconds. The cost of music downloads is quite high (typically around £8 for an album). Personally, I'd like to see a subs scheme, either based around B&W's society of sound download business model or a streaming option, thrown into the mix.

There's little doubt that Imerge's MS1-HD lives up to its billing as 'The world's most advanced home entertainment server.' It's brilliant fun to use, regardless of your geek-creds. I don't think it's the finished article yet but maybe products like this are always a work in progress.

Its limitations with Blu-ray playback will probably have enthusiasts hankering for more able clients to be introduced, and I suspect there are more embellishments coming from Imerge's crack squad of coders.

That said, I'm fairly confident that we can officially announce that the high-end entertainment server market has a new king.