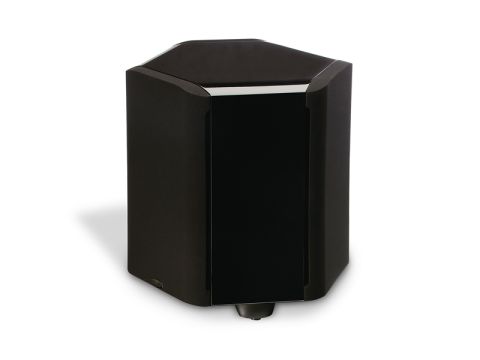 In its black gloss finish, the Signature Sub 2 looks harmless enough, but inside it packs a sextet of 10in drivers

Really big subwoofers are my guilty pleasure, and I've tested some doozies in my time. Yet above a certain level, you have to go visit them if you don't own a house big enough. So I had to head to the recent Sound & Vision show in Bristol to review a subwoofer so huge it might have been an issue getting it installed in my house. The beast in question? Paradigm's extraordinary Signature Sub 2.

This wasn't necessarily because of its physical size (it's not as massive as, say, SVS' cylindrical PC13-Ultra) but because it weighs over sixteen and a half stones – or over 100kg if you're one of those metric types.

The Signature Sub 2 is a stumpy hexagonal spud with three faces with grilles and three that are just wood panels. Under each grille reside two 10in woofers, making this a six-driver subwoofer. Also, these drivers are as defiantly bonkers as any I've met – what I call 'weapons grade' woofers.

Each has two corrugated bottom suspensions called a spider, and the top roll surround suspension is very special. The latter was designed by an engineer who mused while he shaved that the gooseneck support of his shaving mirror kept roundness even as it bent in all directions.

His wife thought he was doing a nutter-out-of-Close-Encounters-of-the Third-Kind thing, mumbling to himself while shaving. But it resulted in the Signature Sub 2's Finite Element Analysis (FEA)- optimised mega-rubbery injection moulded suspension.

Add in the ten-layer long excursion voice coils, and it means that a megalomaniacal 4,500W continuous power amplifier can be hooked up to the speakers, which is what Paradigm has generously shoved inside its flagship woofer.

Yet the cabinet is so well self-damped with equal and opposite forces that you can place a glass of water on top of it and see how it doesn't ripple the water while it booms.

How low can you go

The performance figures of this atom bomb of a woofer are worth stressing. It'll drop as low as 7Hz, will hit 112db at a 10Hz cycles and can raise 126dB at 60Hz. Paradigm's public demos were impressive, and allowed me to feel the taut accuracy of the bass and appreciate the room correction system from fellow Canadians Anthem.

When lunchtime came I was allowed to play about with it myself. A few stalwarts stayed despite a warning. Like Jeremy Clarkson that time he blew the tyres on the Bentley, I unleashed hell upon it. My test disc was More Bass, More Boom, More Bottom, a brilliant CD which drops right down to below 10Hz. It begins with an American-accented voiceover warning you about stuff, segues into curse-ridden rapper-style cautions, and then tries to launch the cones out of your subwoofer.

I cranked the living heck out of the front end to 15dB above the point the Paradigm team felt was 'maximum' for public demos. The track wobbled, yet the Sub 2 ate it for lunch. The resident projector screen started to flap visibly as the room over-pressured. The air vent in the concrete ceiling began to rattle, growl and drop dead flies and debris on the heads of those below, and I saw fear in the eyes of the present public. It was embarrassing but felt good, and I did it for you.

I was a bit ashamed for inflicting this upon the Paradigm chaps, including their Marketing Manager Mark Aling, over from Canada. Looking up, expecting a negative response to my behaviour, all I got was sardonic amusement and a request for a copy of the disc!

The simple fact is I couldn't stress this product in any way. You will reach the limit of what you think is sane far sooner than you will find any limit in the Signature Sub 2. It's an absolute Reference Status subwoofer, and I love it.

Of course, at £7,250, it's priced at the upper end of home cinema gear and may be out of your price range. The good news is that Paradigm also makes the £3,500 Signature Sub 1, which uses 8in drivers instead of 10in ones and 'only' 1,700W of power, in the same super-high-quality enclosure and with equal attention to detail.