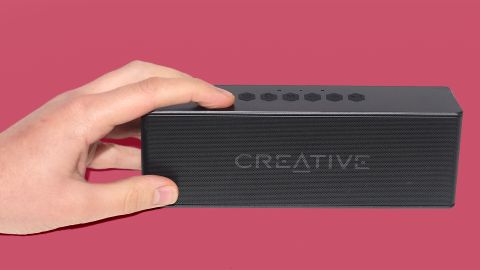 Meet one of the most affordable Bluetooth speakers that still sounds great.

Creative doesn’t take the same approach to Bluetooth speakers as the crowd. Your average speaker tries to either be cute, ultra-rugged or quasi-executive, with a metal shell. But the Creative Muvo 2 is pure pragmatism.

It looks fine but ultimately screams “utility”, has more features the almost any other model at the price and sounds pretty decent next to models that cost 50-100% more. If you're interested in its microSD jukebox and USB playback features, it’s easy to recommend.

However, if you just want a Bluetooth speaker, there are others out there that can best this $44.99 (£69.99 / AU$199.95) speaker in terms of pure sound quality. But if you want a large expanse of functionality, then the Muvo 2 is pretty hard to beat.

When buying a Bluetooth speaker, there are a few rules to abide by. One of the most important is that if a speaker is a lot smaller than a Bose SoundLink Mini 2, there’s a solid chance it won’t sound that great.

The Creative Muvo 2 uses a similar style to that kind of “bar” speaker, but allows a little more height in order to decrease thickness. Next to one of its best rivals, the Jam Heavy Metal, the Muvo 2 seems quite slim. It’d be much easier to fit this into a rucksack, or your holiday luggage.

Build is fine, but it’s another element where Creative has kept the style sensible in order to push costs down. There’s a coated metal grille on the front, the rest is plastic with a soft touch finish. It’s slightly shiny and so shows off marks and muck, and seems to pick up scratches and scrapes quite easily too.

The UE Wonderboom comes across more polished, prettier and more rugged thanks to its weaved nylon grille. On the other end, the Bose Soundlink Mini 2 and Jam Heavy Metal seem more impressive because they have metal shells.

As fine as the Muvo 2 looks, Creative speakers suit those who care more about a speaker’s insides than its outsides.

It does have some neat design elements, though, like IP66 water resistance. This means it can take water splashes and rain as long as the rubber connector bung is in place on the back, but won’t (unlike the Wonderboom) withstand being submerged.

The Creative Muvo 2 is worth a purchase simply for its sound quality per pound. However, its breadth of features also set it apart from the many other Bluetooth speakers in this class.

You can treat the Muvo 2 as a simple Bluetooth unit, but it can also act as a USB soundcard/laptop speaker and an MP3 player. There are six rubber control buttons on the top, and the “M” switches between modes, including these extras.

For the way we use speakers, the USB functionality is the most useful. Just plug the Muvo 2 into your laptop using the charge cable and you can select the box as the sound output, as you might do with an external soundcard.

This way you get charge and sound from the one port.

The MP3 player feature uses the microSD slot on the back. Load up a memory card with MP3, WMA, WAV and FLAC files, put it in the card slot in the speaker’s back and the Muvo 2 can play them directly. They play in folder order but, in theory at least, you can control playback with the Sound Blaster Connect app.

In practice, the app continually fails to connect to the speaker, just as we found with the Muvo 2c. We tried to update the Muvo 2’s firmware to get it working and ended up with a completely bricked speaker. Creative’s update tool is terrible, and only available for Windows too. Avoid.

However, connect with a laptop or computer (Mac or Windows) and you can use separate Sound Blaster software to alter the sound of the speaker a bit, using custom EQ.

Other features of the Muvo 2 are more conventional. There’s a pinhole mic up top to let you take calls with the speaker, you can control playback using the buttons on the top, an aux input lets you plug in just about any source. And you can pair two Muvo 2’s together in stereo.

As you’d expect, this significantly improves the width and scale of sound they put out.

The integrated battery lasts for up to 10 hours between charges, and is charged using a microUSB socket. There’s no charging cable included but if you've bought a phone in the last ten years then the same charger should work just fine.

The Creative Muvo 2c uses the classic driver array for a small Bluetooth speaker. There are two little active drivers across its front, and a passive radiator in-between powered by the output of those drivers.

This setup works a treat in all the best small bar-shape speakers, and does so again here. The Muvo 2 is alarmingly powerful and loud for its size, and at higher volumes the sound has much less a hard edge, and much more confidence, than the Muvo 2C. We’ve listened to it all day long near max volume, happily.

There’s very good clarity in the upper mids and treble, giving the Muvo 2 a clean and clear sound. This is paired with pretty good bass depth and punch. Lesser low-price wireless speakers can sound muddy or thin, but this one is neither.

Even at maximum volume the Muvo 2 sounds composed, not at all “shouty” or harsh, and the bass radiator does not distort. This can sometimes happen when the driver hasn’t been designed properly and the diaphragm ends up moving too far.

Well-balanced, clear and quite powerful, it’s only when the Muvo 2 is compared to some of its best rivals that you start to hear its limits. It’s just not quite as rich or powerful-sounding as the Jam Heavy Metal or Bose SoundLink Mini II.

Vocals sound less smooth, kick drums and basslines restrained. However, the Muvo 2’s bass still comfortably outdoes something like the UE Roll 2, which completely misses the low bass frequencies the Muvo can handle.

Also, let’s not forget the Muvo 2 is slimmer than the majority of “bar” shape speakers. This alone might explain why the bass is neutral-sounding rather than the big bouncy stuff you get with some Bluetooth speakers.

If you look at recommended retail prices rather than actual prices online, there’s very little that can touch the Creative Muvo 2 in terms of pure substance per dollar/pound.

The sound is great, features are plentiful and there’s even fairly good water resistance. Some speakers in this class and the next have more bass, but most are a lot more expensive and almost none have the same breadth of features. It’s a pity the app and firmware update process are deeply flawed, though.