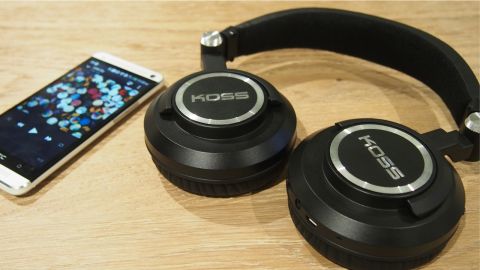 The BT540i takse the cake as one of the best values around for a set of Bluetooth headphones, with balanced audio and a slick design.

I discovered the Koss Porta Pro headphones while I was in college. Oblivious to their decades-old legacy, I found satisfaction in these headphones primarily for their budget-friendly price, but also their ear-opening performance, which offered a higher-quality sound than I was used to.

Fast forward to 2015, the Porta Pro are in their 31st year of manufacturing. At the same time, the Milwaukee, Wis.-based company has marched forward into the world of wireless with the BT540i. At $199 (about £176, AU$256 through international shipping), can these flagship wireless headphones provide the near-perfect balance of value, build-quality and sound performance to kick it with today's innovative competition?

Right off the bat, it's fair to say that the BT540i don't make a loud fashion statement. It's not trying to. The BT540i delivers a favorably plain, but very streamlined design that is eye-catching.

Included in the zip-up carrying case is the BT540i, along with a 3.5mm cable for alternative wired listening and a micro USB charging cable.

Black matte plastic with hints of brushed metal make up the finer details found on the flexible earcups. Moving them around in my hands, the BT540i have a generous range of motion, allowing them to perform a full 180-degree lateral swivel. If you, like me, have a hefty cranium that tests the limits of most hats, you'll be A-OK with the fit of the BT540i.

The functionality of the BT540i is all crammed into the right earcup. Moving your fingers around the outside ring of the cup reveals the 3.5mm input for wired listening, the Micro USB port and the unit's buttons (5 in total with one on/off switch that also toggles Bluetooth discover functionality). The buttons jut out a few millimeters, just enough to feel them with your fingertips, but they're barely noticeable from an onlooker perspective.

The hinges are located just above the earcups. The metal detail capping each end looks fantastic, but doesn't makes a lick of difference in the tensile strength of the already heavy-duty plastic hinges.

Finally, the metal-reinforced headband is covered in leather on the top. The underside of the band is fluffy and soft with cushion wrapped in a material that feels like felt cloth.

Good design is important. A healthy set of features is too. But what commonly detriments an otherwise appealing product is when there's too much pizazz in place of an absence of performance. Can the Koss BT540i strike this balance without sacrifice?

Something sounded familiar with the BT540i. The drivers are Koss' own unique PLX40 drivers, but the sound signature I enjoyed in the Porta Pro is back, but better than ever in these wireless headphones.

Comparing the new BT540i to the aging, but still great Porta Pros won't do us much good anymore. It's time to leave nostalgia behind. What matters more is how the BT540i ranks up against some of the prominent contenders in the wireless headphone space.

For the price, it's tough to beat these Koss headphones. I was tickled how spot-on the sound was. The stunning clarity at which the lows, mids and highs present their accuracy can be heard with this music sample, "Love Cry" by Four Tet.

The BT540i presents a natural, balanced sound that steers clear of being too bass or treble-heavy. It's a sound signature that I enjoy, but it's not quite what some of my colleagues in the office were looking for. There are, undoubtedly, many of you who also prefer a warmer sound that leans more on the low-end, or a cooler sound that's more mid-rich.

Battery performance and Bluetooth connectivity fared well through more sedentary day-to-day operation like sitting at my work desk. They also delivered through more frantic activity like speed-walking through my commute. Some tests proved that connecting via NFC was a little difficult, but still possible. Call clarity was clear and the dual microphones helped to transmit my voice without feeling the need to shout.

The button layout on the right earcup takes some effort to learn. Since it's out of sight, errors will occur until you warm up to it.

I was a little buggered by the finicky NFC-connectivity, which was really hit or miss with the NFC-enabled HTC One. After 5 minutes of awkwardly smacking the phone against the BT540i, it connected. A very inelegant solution to what shouldn't be a problem at all.

The BT540i don't offer the most innovative list of features for a modern set of wireless headphones, especially when compared to flashy alternatives like the JBL Synchros S400BT. If you're looking to spend even less money, check out the JBL Synchros E40BT, which we liked a lot for under $100.

On the other hand, if you're jonesing for premium features, like active noise cancellation, prepare to pony up to $250 for the Plantronics BackBeat Pro. Ultimately, at $200, the Koss BT540i work superbly and are a fantastic value for anyone looking for a straight-shooting set of wireless headphones.