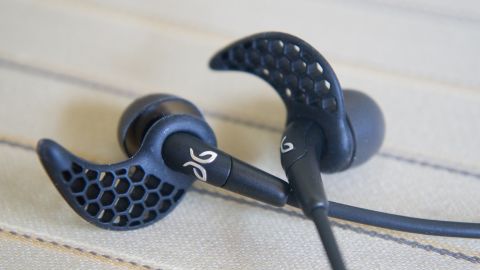 The Jaybird X2 offer mediocre sound and stunningly small design but there are too many compromises to justify its high price tag. Having just four hours of battery life and a finicky fit are real bummers, especially considering there are better alternatives out there for less money.

With the Jaybird X2, the upstart audio company surprised us with a fantastic pair of wireless in-ears. The X2 has a smart design, strong battery life and some superb audio performance. It was going to be a tough act to follow.

If it was going to best its own good work, Jaybird was going to have to go back to the drawing board and reimagine its line from the ground up. That's resulted in the Jaybird Freedom Wireless.

And though Jaybird has looked to take the line in a bold new direction, it's not quite the knockout hit that it had been looking for.

When I first opened the box, I was shocked at the size of the Freedom headphones. Most Bluetooth in-ear headphones are usually pretty bulky, as they have to put batteries somewhere. The Jaybird X2 was guilty of this, but the Freedom is a complete departure from the X2.

Instead of having the batteries reside inside each earbud, the Freedom headphones relocated the battery to the now relatively bulky remote control. This allows the solid aluminum earbuds to be super small, aiding in comfort and fit.

But the Freedoms may be too small for their own good and here's why. Moving the battery to the remote has cut battery life significantly. Whereas the Jaybird X2s feature an advertised battery life of eight hours (we saw over 10 hours of use), the Freedom Wireless only manages 4 hours.

The Freedom's small earbuds also made fitment a pain for me. I went through every earbud combination, but the earbuds kept falling out of my ears. It wasn't until I added the stabilizing wings that the earbuds finally stayed in place. Not everyone's ears are the same, mind you, so your mileage may vary here.

In the hand, the Jaybird Freedoms feel bulletproof. The aluminum earbuds will survive getting crushed in your bag and its cable is robust enough to resist the most strenuous workouts. The buttons on the remote are satisfyingly tactile, and since there's no microUSB port on the remote itself – it's been relocated to the external battery pack – the entire design is super sleek.

Despite loving the original X2's performance, I came away underwhelmed with the Freedom's sound quality after spending several days listening to a variety of music.

High frequencies are a bit rolled off and strident on some tracks, which got fatiguing after long listening sessions. Bass is powerful, but uncontrolled and flabby, especially on some bass-heavy electronic music. Mids, on the other hand, sound a bit recessed, hiding a singer's voice among other instruments.

Thankfully, Jaybird includes a nifty MySound app for Android and iOS that allows you to customize the sound signature with a basic equalizer. The app also includes presets from famous athletes, but I found their settings pretty terrible sounding and ended up creating my own EQ instead.

Without tweaking the sound balance, the Jaybirds made music sound flat and lifeless. Worse, no matter how you tweak the EQ, it won't help with the Freedom's confined sound stage, which made everything sound like it was playing between my head.

Once you've settled on a sound profile, the Jaybird Freedom saves your EQ settings to the headphones itself so your customized sound comes with you no matter what device you have paired. The app also gives you a live battery indicator, so you're not left guessing exactly how much time you have left before you have to charge. These are killer features I wished more wireless headphones offered.

While I wasn't impressed with the sound quality, I was impressed by the Jaybird Freedom's Bluetooth connection. The wireless connection remained strong throughout my testing, and exhibited little to no hiss at lower listening volumes.

The middling sound quality wouldn't have bothered me as much if competition wasn't so fierce in this space. I found the NuForce BE6i offered much better sound quality, and loved its 8-hour battery life and aluminum build. Oh, and it helps they're half the price of the Jaybird Freedom.

The Jaybird Freedom in-ear headphones are impressively compact, resulting in a more comfortable fit than its larger competitors. The headphones come packed with a variety of eartips and accessories to help you find the perfect fit. Jaybird's app is super useful as well, allowing you to store your sound profile on the headphones themselves.

But there's a lot to dislike, too/ Middling sound quality, shorter battery life, and increased price make the Jaybird Freedom's $200 (about £150, AU$260) price tag hard to justify when compared to the competition.

Jaybird had a tough job following up its excellent X2 and, unfortunately, the Freedom Wireless take a few too many steps back. Comfort and design are definitely high points for the Freedoms, but their mediocre sound and short battery life make them hard to recommend.