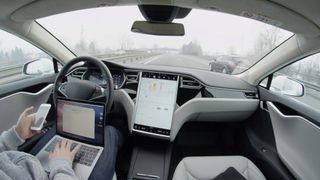 You'll soon be able to stream TV shows and movies to your Tesla's dashboard via Netflix and YouTube, according CEO Elon Musk.

Although Teslas will eventually be fully autonomous, that isn't likely to happen for several years, so it won't be possible to stream content when your attention should be on the road. Instead, the new feature is intended to keep you entertained while your car is charging.

Musk says that a Tesla's luxurious interior and surround-sound audio will provide an "amazingly immersive, cinematic feel" while you're in park – something like a 21st century version of the classic drive-in cinema.

Ability to stream YouTube & Netflix when car is stopped coming to your Tesla soon! Has an amazingly immersive, cinematic feel due to the comfy seats & surround sound audio.27 July 2019

This news comes just weeks after Tesla made a major upgrade to its in-car gaming system, introducing Tesla Arcade, which effectively turns your dashboard into a fully-fledged gaming platform and (apparently) allows you to play driving simulators using your car's actual controls.

A karaoke app is also on the way, and the Sketchbook drawing tool has received a major update to let in-car Carvaggios create more realistic finger-paintings.

There are even suggestions that Tesla's long-rumored music streaming service might be on the way soon as well, but its existing partnership with Spotify might mean that particular idea has been sent back to the drawing board.