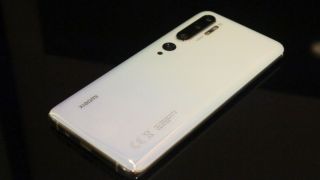 One of the most anticipated phones of early 2020 is the Xiaomi Mi 10, and new hands-on shots have given us the first 'real' pictures of it (other than leaked renders). Fans of Xiaomi phones might find these pictures eerily familiar though – they show a device that looks a lot like the Xiaomi Mi Note 10.

These pictures come from TechDroider, who posted them on Instagram. It's not clear where these pictures originated though, and the posting refers to them as a 'concept device'.

But based on some contextual clues (a wire attached to the device, and a visible placard in the background), we'd guess it's a media hands-on event where they got to test the phone.

The leaked pictures show a sleek device with a curved screen, a rear camera bump in the top left of the back of the phone, and a punch-hole cut-out front-facing camera. Save for this last point, it's incredibly similar in terms of design to the Xiaomi Mi Note 10 from late 2019, even down to the color of the device, known as 'Glacier White'.

While the Instagram post refers to this device as the Xiaomi Mi 10, we'd expect it's actually the Mi 10 Pro, as we've heard the former will have a flat screen while the latter will have curved display edges.

We were pretty big fans of the Xiaomi Mi Note 10's design, but it's still surprising just how similar the Mi 10 seemingly looks to the older device. Perhaps Xiaomi has taken to heart the mantra 'if it ain't broke, don't fix it'.

It's worth emphasising that this image is referred to as a 'concept based on leaks', but it's almost unprecedented for someone to make a physical device based on leaks. So while it's possible that someone went to a lot of effort for this posting, it's also possible that was just said to protect a source (or is a translation error of some kind).

Either way, we'll find out for sure in the first few months of 2020 (likely at MWC 2020 in February) when we're expecting the device to launch. Stay tuned to TechRadar for all the latest news.