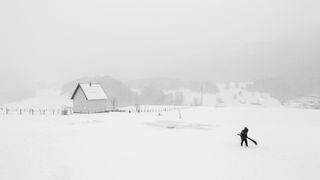 The largest photo competition in the world, with over 227,000 entries from 183 countries, revealed the winners of its 2017 contest at an awards ceremony in London last night.

The World Photography Awards is celebrating its 10th anniversary this year, as well as a decade-long partnership with headline sponsor, Sony. The aim of the awards is to recognize and reward the very best contemporary photography captured over the last year.

Belgian photographer Frederik Buyckx was named Photographer of the Year, and received $25,000 and some tasty Sony photography kit for his portfolio titled 'Whiteout'.

Buyckx’s photographs were chosen from the winners of the competition's 10 Professional categories. Chair of Judges Zelda Cheatle says: “I have chosen a series of landscapes so that we may return to the essence of looking at photography. Landscape is often overlooked but it is central to our existence. These are beautiful pictures made by a serious photographer, and they are to be enjoyed. I hope this award will inspire many more photographers to take pictures that do not simply encompass the terrible aspects of life in these troubled times but also capture some of the joys and loveliness in each and every environment.”

Every morning around 10 o'clock the shepherds leave the little town into the mountains with their herd of sheep to graze. Temperatures are often around -20C in winter.

A donkey is getting up after rolling in the snow in the mountains in Albania.

In the North of Montenegro a shepherd is walking to his herd of sheep with a self-made broom in his hand. The broom was used to wipe off the snow lying on the back of the sheep.

Finally, British photographer Martin Parr was honored with the Outstanding Contribution to Photography prize at the awards ceremony. He was recognized for his unique visual language and for pushing the boundaries of the medium.

An exhibition of all the winning and shortlisted work will run at Somerset House, London from 21 April – 7 May. The 2018 Sony World Photography Awards open for entries on June 1 2017.

To see all the winners and finalists, and how to enter next year, visit the World Photography Organisation's website.