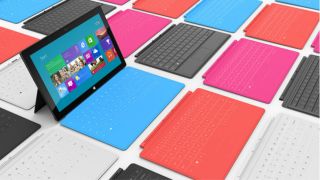 Windows is finally putting up a fight in the touchscreen market, and it's about time too

What a busy end to the year it is. Just when we were expecting to take things a bit easy in the run-up to Christmas, we're swamped with countless brilliant products from all over the place.

We're finally seeing the latest generation of Philips TVs. Panasonic is still (just about) putting out excellent plasmas. And of course, brilliant mobile devices are flooding in from every corner of the globe.

The iPad mini and iPad 4 will take some of the attention, of course, but spare some room in your brain for the likes of the Microsoft Surface and the Google Nexus 4, giving Apple a serious run for its money.

Surface is Microsoft's first real effort at taking on Apple and its iPad with a fully functional toushcreen tablet of its own. Surface makes you want to pick it up and play, pleases you with the delivery of Windows RT and the live tiles make it feel personal and alive. Performance is a real issue, but since Tegra is at the heart of high performing tablets, we hope that RT can be tweaked to iron out slowdown issues. Microsoft's hardware designers should be applauded for delivering a solid tablet which delivers a great experience, but now it's down to the fortunes of the Windows Store to decide whether Microsoft Surface is remembered in history.

With the TX-P42X50B, Panasonic makes a compelling, though possibly last-ditch, argument for plasma as the tech of choice for living rooms. In the Twenty-Teens the question shouldn't be 'Why plasma?' but, instead, 'Why not plasma?' since the TX-P42X50B handles both motion and standard-definition TV far more smoothly than any LCD TV. Perfectly suited to the mix of resolutions on Freeview HD, the TX-P42X50B is ideal for film fans – though only those primarily watching DVD and not concerned with ultimate 1080p resolutions as this TV is HD Ready, not Full HD. In short, Blu-ray owners might want to look elsewhere – and DVD collectors after a TV that's kinder to standard definition discs might want to move to the TX-P42X50B from an LCD TV. Plasma isn't dead yet!

The iPad 4 appeared two weeks ago from nowhere and without anyone predicting it. But here it is, alongside the iPad mini, and it's the best iPad ever! Sure, the price is a little high, but given many tablets are coming in at well over £500 / $AU600 these days (plus the fact so many people are willing to pay it) we can't criticise Apple's pricing too much here. We do feel there should be a touch more 'awesome' for a 64GB device at a near £700 / $AU760 price tag, and beyond the screen there isn't too much more of an upgrade on show - at least until we get some titles that really show off the prowess of the new iPad's internals. Still though, if you've been lusting after an iPad since 2010, there's never been a better time to buy one.

The Google Nexus 10 is an incredibly important product for Google. With the Nexus 7 it entered the tablet market, but was only really competing with other Android tablets - it was friendly competition and it was against devices that by and large had struggled to achieve much market share anyway. With the Nexus 10 it's inevitably going to be compared to its biggest rival: Apple and one of its most successful products, the iPad. In short it can't afford to get this wrong, so needs to hit the ground running in the larger tablet market and even then it's going to be an uphill struggle to make much of a dent in the iPad's sales. Google clearly realised this, because it has delivered a top-end device with a world beating screen (at least in resolution terms) and a modest price tag; but is it enough to topple the iPad and take its place at the top of the heap?

Google and LG have worked together to bring to market a fantastic offering. We showed it to two friends who are both Apple fans. The kind of people who shower in holy water if they're exposed to Android. Both of them were smitten.