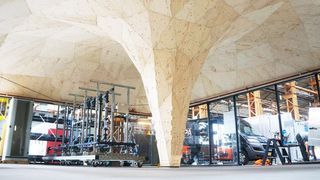 This lovely building was carefully crafted by a robot, using automatic milling techniques. It's apparently the first robotically-fabricated building in the Netherlands, according to its designers Studio RAP.

The 130-square-metre space was designed in a 3D modelling program, which yielded plans that involve 235 wooden panels.

A robotic arm then carefully milled the panels out of wood, which were installed into a disused machine hall by humans.

"The unique shape of the vault is distilled out of digital form-finding methods," said Wessel van Beerendonk, one of the three studio founders, in an interview with Dezeen.

"This optimisation results in a compression-only roof structure. The vault rises up in a spectacular way from a central column that gradually blends into the roof construction in one smooth motion."

He added: "Through digital fabrication, the architect can become a master builder, with increased control over the quality and integrity of the building in relation to the design intent."

You can see how the building was put together in the following video: