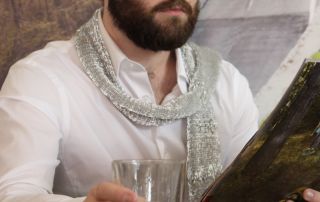 Sustainability is a huge problem for the fashion world. According to wrap.org.uk, approximately £140 million (around 350,000 tonnes) of used clothing goes to landfill every year in the UK alone. While consumption of clothing is going up, resources are depleting at a much faster rate.

Elena Corchero, a multi-award-winning designer and former MIT researcher of wearable tech and smart materials, believes that the mass production of cheaper clothing in China is to blame.

Speaking at OMD's UK Innovation Week, Corchero explained that manufacturing used to be done locally in communities where people worked and spent their money. Its move to China, she says, has led to declining transparency in the manufacturing process, which in turn has led to products becoming devalued over time.

"As a designer myself, I blame designers and companies who aren't transparent, she says. "The way things are made becomes meaningless, just like the products themselves."

Corchero believes there is an opportunity to reintroduce meaning and value into bespoke products by customising them through technology to suit people's individual tastes.

"In London, stores now have the ability to create clothing in-house, which provides full transparency so that you can see what's happening," she says. "It makes it possible to customise products, and it's not necessary to have piles of stock as the products are made there and then.

"You don't even have to ship anything and there's still a high production of wool in Scotland. It's a win-win situation."

Corchero, a self-proclaimed "design activist", has worked on a number of fashion projects that use environmentally-friendly methods and materials, with clothing being just one product category.

Her projects include LED-backlit jackets that were worn during the closing ceremony at the 2012 Olympics, high visibility signs that glow as bright as street lamps using reflective materials (rather than electricity), and eco-friendly necklaces that change colour to indicate the power of the sun's UV rays.

"Design activism makes you realise that, as a designer, it's not just your duty to design responsibly — it's a privilege," she says. "It's an important movement."

Corchero highlights 3D printing as another area set to give rise to design activism, as it lets fashion designers be creative without being wasteful of resources.

"When you're making a jumper, you used to need wool, tools, pins and knitting needles," she says. "With 3D printing, you just need the material for the 3D printer, which changes the picture a lot."

Wearable technology and fashion, she adds, will benefit from 3D printing as people become more accustomed to wearing clothing embedded with electronics. She points toward Apple's collaboration with Hermes as an example of wearable tech breaking into the mainstream.

"It's no longer NASA or military agencies developing wearables," she says. "It used to be Philips, then Nike, and now everybody's doing it."

The problem, then, is eliminating the stigma associated with wearable technology in public. Google Glass, which failed to take off due to its wearers being overly conscious of wearing them, and privacy concerns, is the most prominent example of recent times.

Whatever technology is involved, Corchero says that manufacturing around the world will begin to emulate evolving practices in China, where 80% of factories will be robotisized by 2020. As tech gives rise to further automation, designers have an opportunity to stand out by focusing on creativity through environmentally-friendly methods.

"The educational system there has changed so that people aren't moulded into becoming makers of products," she says. "They're prepared from an early age to be innovators."

OMD UK's Innovation Week is on until Friday 6 November and features talks from Google, Microsoft and others.