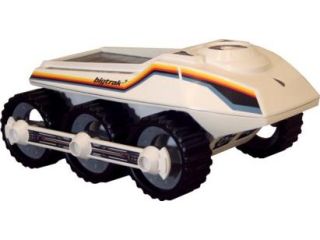 Bigtrak - back but not as big

While the '80s may be best remembered for things that should never make a comeback – spandex, hair metal and bum-bags – some things need resurrecting for nostalgia stakes, and this includes the Bigtrak.

This six-wheeled robotic toy was a mainstay for any Eighties child, managing to remember numerous commands and fire fricking lasers from its phaser canon (well, in our head anyway).

To bring it right up to date with the Tenties (or whatever we are calling 2010 nowadays), its maker Dubreq has added a few new features to the device, including 'cool new accessories' – a new memory save feature and mooncrater obstacle course – and a digital camera so you can turn your Bigtrak into a remote spy robot.

So far, the company has only announced that it will be releasing a Bigtrak Jr, which is half the size of a normal Bigtrak. We are hoping that an original-sized version will be in the works at some point, however.

Go to www.bigtrakisback.com for more details.

With a UK release date of summer 2010, the Bigtrak will retail for £29.99 - which means it might even be cheaper by Christmas.