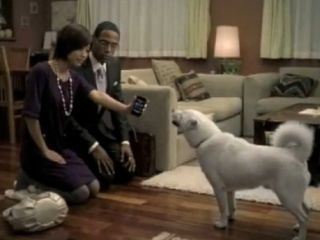 "Hello, is that the talking dog?"

It seems that the job of selling shiny kit sends ad guys round the twist – especially if this lot are anything to go by. Some use sex, others humour and some, just plain weirdness. And, as you'll see, a strangely large number are Japanese.

So here, gathered together for your amusement, are our 15 favourite bizarre tech ads.

Laser printer/copier turns into attractive woman who then fires colour prints from her breasts. We kid you not. Seriously, the Japanese seem to use sex to sell absolutely everything. Apart from Windows 3.1, obviously.

Android isn't advertised that much in the UK, so it's a bit odd to take in this Korean ad for the OS. What's the burping all about? We'd love to hear Google PR's take on that one...

Tech ads featuring celebs are usually inane enough. This is just plain odd and one can only assume that Costner was paid a hefty wedge to do this ad that supposedly pointed towards a new way of doing business as, to be honest, it's dull as ditchwater. If anybody watched this and thought 'I want a Mac,' they must have been pretty darn depressing to have a conversation with.

This is the kind of slightly-sick clip that's two-a-penny in Europe, but would probably get Ofcom hot under the collar in the UK. Still, what high jinks eh?

The guys behind this ad must have been on some pretty strong drugs. Business man overhears kids talking about Sega and daydreams about what he heard all day. So much so that he bumps into a nasty gang member as he walks by them and gets beaten to a pulp as a consequence. Great message there guys.

Man, this one is CRAZY! If you can work out what's going on, you're better than us but basically some Japanese guy lives in a haunted house and is obsessed by Windows. So much so, that he decides to shout it out 26 times at the top of his voice.

WTF wasn't common parlance in the 1980s, but if it had been it would have been used numerous times to describe this messed up ad from good ol' BT. Sorry, we meant British Telecom. It probably sums up the zeitgesist, but we want to poke our eyes out after watching it. Cool that the phone goes on the wall though. WHO'D HAVE THUNK?

What is going on with these moustaches? We hope no kids saw this ad as it would surely have caused a permanent fear of face fuzz.