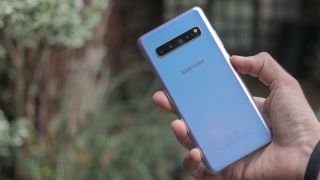 Nothing is known for sure about the Galaxy S11, but there are some key aspects of the Note 10 range that allow us to take an educated guess at what it might offer.

That’s exactly what we’ve done here, so read on for a look into a possible future, based on the Note 10’s present.

1. It probably won’t have a headphone jack

That doesn’t mean you won’t be able to use wired headphones, but does mean you’ll need a USB-C adaptor to do so. This isn’t all bad news though, as the lack of a headphone port could allow for two key improvements, mentioned below.

At 4,100mAh, the Samsung Galaxy S10 Plus’s battery is already a reasonable size, but the 3,400mAh Galaxy S10 is less impressive, and both could be improved, especially if there’s no headphone port, as removing it will free up space that could be used for a larger juice pack.

While not the most exciting of upgrades, this could be a very useful one, as battery life hasn’t really improved on phones over the years, so we’ll take any boost we can get.

3. The body could be thinner

The lack of a headphone port could also allow Samsung to make the Galaxy S11 thinner. At 7.8mm thick, the Samsung Galaxy S10 is hardly fat, but it is chunkier than some phones, and a slimmer build could help improve the appearance, making it look even more modern and premium.

One position isn’t objectively better than the other, but this could be a sign that Samsung will move the punch-hole to the center for the Galaxy S11 as well. Then again, the differing positions might be one way the company plans to differentiate the ranges.

5. There could be more cameras

With Samsung always looking to improve its flagship’s cameras, this could be a sign that the Samsung Galaxy S11 will get one or more extra lenses, to match or beat the Note 10 Plus.

It may well even use the same lenses, as three of the lenses on the Galaxy Note 10 Plus are the same as the ones on the Samsung Galaxy S10, it just adds a DepthVision camera to the mix, for sensing depth.

It would make sense for Samsung to add something along these lines to the S11 range, as it’s a lens type that is currently missing and which many other phones offer.

6. 5G could come as standard

With the Galaxy S10, Samsung released a special 5G model which was different to the rest of the range in numerous ways, but with the Galaxy Note 10, the company simply allowed you to optionally add 5G to the standard Note 10 Plus.

This shows that the company is moving to make 5G a more standard feature in its range, which makes sense, as 5G networks are starting to become a bit more widely available.

So for the Samsung Galaxy S11 range we would at a minimum expect a similar approach to the Note 10 – with 5G being an optional extra for the handsets. However, we wouldn’t be surprised if Samsung goes a step further and makes it a standard feature, just as 4G is a standard feature on pretty much all phones.

The fact that the Note 10 range looks a lot more like the S10 than it does the Galaxy Note 9 further suggests that this is a design Samsung is set on for a while.

There’s no real getting away from Bixby – Samsung’s AI assistant – on the company’s recent phones, but Samsung has at least removed the dedicated Bixby button for the Galaxy Note 10 range, so this is another change that we think is likely to appear on the Galaxy S11.

For those of you who actually want to use Bixby this is no great loss, as you can simply launch it by holding down the power button, and for everyone else this should be a welcome change.