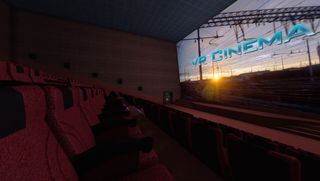 The Oculus Cinema app replicates sitting in a private cinema or home theatre, but has so far had the viewer sitting and watching the movie alone.

But Oculus wants to get a bit more realistic with what is generally a more social activity - going to the movies with friends or family.

Speaking to Road to VR, Oculus creator Palmer Luckey explained that the point of the app isn't to be sitting in a movie theatre alone, instead, "you want to replicate the experience of being in a movie theater or home theater with all of your friends."

And so, with the release of the consumer Oculus Rift, set for early next year, the Oculus Cinema app will roll out more social, multiplayer-like features.

"We already have a lot of internal social functions in Cinema that are going to be rolling out in the next few months," he said.

"Things like avatar systems, being able to communicate with people over long distances… rather than just local multiplayer, but having actual long distant multiplayer as well."

This basically sounds like the app will let you chat or interact within the 'cinema experience' with other Oculus users.

Oculus Cinema is currently available on Gear VR, with the app's new social-friendly features to be rolled out with the release of the Oculus Rift in 2016.