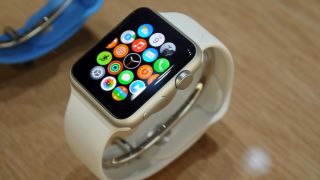 The first Apple Watch sales estimates are in, even though the iPhone-tailored smartwatch just became available to pre-orderers in time for today's release date.

The sale data, limited to US shoppers so far, reveals that an estimated 957,000 people bought the new watch two weeks ago, according to Slice Intelligence.

That contrasts with Android Wear watch sales that were reportedly stuck at 720,000 sold by the end of 2014. That's a global estimate with six months of availability for several watches.

An average of 1.3 watches were sold per person in the US, according to the projections from a sample size of two million online shoppers.

Apple Watch sales predictions for all nine launch countries range from 2.3 million for day one to 20 million for the launch window, when backorders get fulfilled.

The Sport is strong with this one

Breaking the Slice numbers down further is even more interesting. The Apple Watch with the black Sport band sold the most at 28%, according to the early estimates.

In fact, among all of the entry-level Sport models, this all-black variant claimed 64% of the sales with the white model at 22%. Blue finished at 6%, while pink and green tied at 4%.

The Milanese Loop was popular at 25% followed by the more expensive Link Bracelet and black Classic Buckle in the teens.

Apple Watch sold out in minutes

If you've yet to your smartwatch or Apple Watch bands, expect a wait. A long, long wait. Apple Watch sold out in a matter of minutes following its April 10 pre-order start date.

Shipments of nearly every unit in the US and UK have been pushed back to June. Only a few of the stainless steel watches in the 38mm size ship say they'll be ready in "4 to 6 weeks."

What's unknown is the inventory that Apple has in stock in advance of pre-order day, and its impact on the current backorder situation.