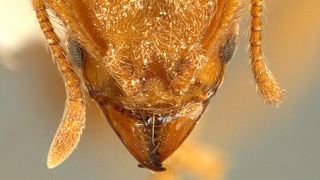 Myrmecologists from the Smithsonian Institution's Ant Lab in Washington DC have discovered three new species of ant, one of which is named after British band Radiohead.

"We wanted to honor their music" one of the authors of a paper describing the discovery, Ana Ješovnik, says. "But more importantly, we wanted to acknowledge the conservation efforts of the band members, especially in raising climate-change awareness."

The species, known by the scientific name Sericomyrmex radioheadi and found in the Venezuelan Amazon, is part of a genus of "silky" ants that have figured out how to farm their own food. A relative of the famous leaf-cutter ants, they grow "fungus gardens" to feed themselves.

Interestingly, in the course of their research, the biologists discovered that female ants of the species are covered with a white, crystal-like layer which is entirely absent in males. It's not yet clear what it's made of, or what it does, but one theory is that it could protect the ants and their gardens from parasites.

Meeting in the Anthill

The genus is undergoing a process called "rapid radiation", where organisms diversify quickly into many species, meaning that they're a good model for how new species form. As such, the team admits that the species they've classified might actually be multiple species that look alike.

The researchers write in the paper that Radiohead's music "is an excellent companion during long hours at the microscope while conducting taxonomic revisions of ants".

All three are described in a paper in the journal ZooKeys.