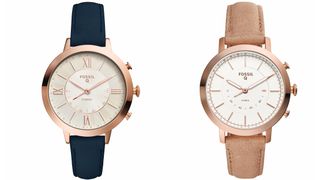 If you want something that looks like an old-school watch but with some extra smarts, then you’re probably after a hybrid, such as the new Fossil Q Neely and Fossil Q Jacqueline, which aim to stand out in part through being smaller on the wrist than other Fossil hybrids.

That’s key, as smart and even hybrid watches are often chunky things, but the Q Jacqueline and Q Neely have just 36mm cases, making them better suited to slender wrists.

While style is subjective, it’s clear that there's a fashion focus with this pair of watches, along with the potential for customization through a selection of leather, silicone and stainless steel straps, but the smart features haven’t been neglected.

Vibrations and watch hand animations can alert you to notifications from your phone, as well as allowing you track fitness goals such as steps, calories and sleep.

You can also set custom fitness goals and view the time in multiple time zones, while customizable shortcuts let you use the three pushers on the side to do things like control your music, take a photo with your phone’s camera, ring your phone, check your commute time or activate a stopwatch.

If you’ve already got a Fossil watch there’s news here for you too, as Fossil has also redesigned its app, aiming to offer a streamlined interface that makes it easy to get at the most used features, such as activity data, notification customizations and customized shortcuts.