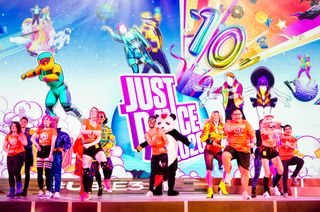 The world may be waiting with bated breath for the Xbox Project Scarlett console, but at least Ubisoft hasn't given up on some old, faithful gaming platforms.

At its E3 2019 keynote, Ubisoft announced Just Dance 2020, the next game in the series timed with the line’s 10th anniversary. The game is coming out on the usual suspects - Xbox One, PS4, Switch, and even Stadia - along with a surprise platform: the Nintendo Wii, per Ubisoft's press release.

No, not even the Wii U - it's coming the original Wii system that launched in 2006 bringing inexpensive motion controls to the world. Ubisoft may be the last big publisher to release a game on the venerable platform, but it’s fitting that it’s a Just Dance title.

The first Just Dance came out exclusively on the Wii in late 2009, using the Wiimote to crudely track dance performance a la Rayman Raving Rabbids. Every game that followed in the main series has appeared on the Wii, up to and including the just-announced Just Dance 2020.

It’s a sweetheart consideration that doesn’t apply to any other console. True, the Just Dance series is known to support old consoles well past their prime - Just Dance 2018 had editions for the Xbox 360 and PS3, and Just Dance 2019 still came out on the Wii U - but now, the only non-current-gen system that will get to play Just Dance 2020 is the old Nintendo Wii. (As a bonus note, this will have to be a physical disc release since Nintendo shut down the Wii Store back in January.)

And sure, this is a business decision: the Wii sold over 100 million units, which is a massive userbase that, apparently, still buys Just Dance games. The franchise is a relative colossus big enough to sell its film rights back in January 2019, per Deadline. But it’s nice to know that Ubisoft is still supporting the console so players who supported the first games can still get their groove on with the latest songs.