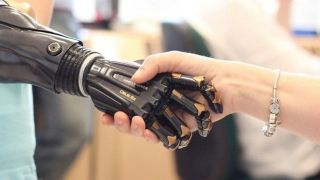 By the end of the First World War, there was no shortage of amputees. Of the seven million British soldiers deployed, 41,000 had amputations in field hospitals or medical facilities behind the lines.

Prosthetic limbs had existed for hundreds of years before the War, but the sudden influx overwhelmed medical services on all sides. And even with the return to rudimentary mobility offered by a prosthetic leg, one thing remained with amputee veterans: shame. Returning soldiers needed to be reintegrated, to find jobs, to support families. Many while hiding - as best they could - whatever rudimentary prostheses they could have fitted, or rejecting them outright in favor of sticks or crutches.

“During that time period, people didn't want anybody to know that they were an amputee,” says Scott Schneider, Chief Future Development Officer at Ottobock, one of the world’s largest manufacturers of advanced prostheses.

“When I started my practice, some people would walk in the back door, because they didn't want to let other people know that they [were going] to a prosthetics facility. It was very secretive.”

The company’s founder, Otto Bock, saw the yawning gap in supply and demand for prostheses after the Great War. In the early 20th Century, prostheses were still niche stopgaps: whittled, strapped or forged to fit amputees by craftsmen. Bock took the best of the existing ‘technology’ and put it into mass production.

Nearly 100 years later, its current top-of-the-line model, the X3 is still helping soldiers. Developed for veterans who have lost legs above the knee, the X3 is fitted with microprocessors and sensors that allow a soldier to pull an 80kg squadmate, out of a foxhole, backwards.

“That's pretty amazing when you're doing it with one, or two prosthetic knees,” says Schneider.

That shame and stigma around prostheses is changing. As military-backed technology (Ottobock works closely with US Department of Defense) trickles down into the civilian healthcare system, and as more and more amputees see top-end limb replacements fitted to soldiers and elite athletes, the line between ‘able’ and ‘disabled’ begins to blur - for the user and the able-bodied public. There’s still no true replacement for a lost limb - but their prosthetic replacements are now functional and futuristic enough not to be hidden, but worn with pride.

“It's very individual and sometimes [comes down to] the type of amputation,” says Schneider. “[But] I think the best quote I've ever heard from one of our patients was: 'I don't mind being an amputee, so long as I don't feel like an amputee.'"

But top-tier prostheses are expensive - not just prohibitively, for most amputees, but unnecessarily. A high-end prosthetic can easily run into the tens of thousands of pounds. But Bristol-based Open Bionics - a prosthetics company that 3D-prints its arms to bring costs in-line with expectations from the NHS - doesn’t need to create arms that can drag adults out of foxholes. Rather, it makes arms that allow amputees to write, open doors and shake hands again. Perhaps as importantly, it makes arms that look - and feel - cool.

“There was this feeling in the amputee community that the end-user could never talk to the people who were designing their limbs,” says Samantha Payne, Open Bionics co-founder and COO.

“We brought in the users, the people who actually experience the problems, at a very early stage so that they could help us build the solution. We found that there was a really big psychological aspect to prosthetics that hadn't really been addressed before: how wearing a device makes you feel day-to-day, how it affects your confidence, how it affects your self-image, how it affects your body image, how your peers interact with you. It affects how people address your limb difference.”

3D-printing its prostheses means more than just lower costs. Functionality may be paramount on the battlefield or in sport, but the problem of stigma and shame is maybe nowhere more pointed than on the playground. Open Bionics doesn’t exclusively produce its hands for children, but users like 11-year-old Tilly Lockey and its range of arms inspired by Iron Man, Star Wars and Frozen are what really caught the global media’s attention. Kids can be mean, and a missing limb or crude prosthetic makes a child an easy mark for bullies.

“In the beginning, we were just 3D-printing in whatever color filament possible,” Payne continues.

“We would make them black, or grey, or even skin-toned. But then once we started really focusing on this co-creation methodology and holding amputee workshops, we were hearing these really traumatic stories from young people growing into adults who felt this huge stigma because of their limb difference. If they were wearing a cosmetic hand or a hook at a young age, like at school, it would make them want to hide their limb.

“This created a really negative body image that they carried into adulthood. And it was through no fault of their own: it was how others perceived them and others treated them. Obviously at school, any difference between a schoolchild is going to really stand out because everyone's trying really hard to fit in. So, they [thought], 'If I am going to stand out for having a limb difference, I don't want to have a Victorian-age technology hook. I want something really cool, something that makes people ask, 'Oh my God, what is that?' in a really good way, rather than, 'Oh, what happened to you? Tell me your traumatic amputation story.'”

From disability to enhancement

These advances in prosthetics at both ends of the pricing spectrum beg an obvious question: when will - per decades of predictions in science fiction - bionic limbs surpass the ones they’re replacing? When - if ever - will we reach the point where prostheses become ‘enhancements’ - desirable upgrades for able-bodied people, no stranger than a facelift or a tummy tuck?

“In terms of prosthetics technology and how it can match humans' capabilities, we're a long way off,” says Payne.

“But culturally, we're not far off at all. So, when we released the Iron Man hands and the Star Wars hands, and they had all these extra functions - they could light up, they could play noises and had all of these different modes

"They looked so cool; the smiles and the confidence of the people wearing them and how it made them feel, made them really attractive to everyone who got to see them and meet them in real life and shake their hands. We were getting messages from people saying, 'Can I get one? I've got two hands, but how can I get one?' And people were joking on our Facebook page, saying, 'I'm willing to have my limb removed to have one of these.'

“For us it's quite morbid!” Payne says, laughing. “But I think it did a really good thing: it changed the conversation to something aspirational, and it felt like for the very first time in this community that it wasn't a clinical thing. It wasn't a conversation about disability, it wasn't about going to the hospital, it wasn't about medical advice - it was about having something that made you stand out for a really good reason. It made you admirable. People wanted to be you.”

Ottobock’s Schneider agrees. Though if your dream is to one day leap tall things in a single bound or punch your way through a wall as a bionic superhero, there may be hope yet - for the able-bodied and amputees alike.

“I think the next step in technology will be assisted devices,” he says. “I was at a robotics conference speaking last April and a lot of these companies were actually selling devices that users can put on like a suit, that then enables them to lift more weight. So it's not replacing an arm, but it may be putting a device on that arm or that back or that body to be able to work along with their own hands.

“More like an Iron Man, than the Six Million Dollar Man,” he concludes.