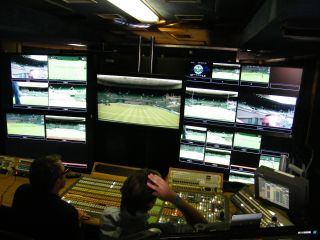 It's no happy accident that Wimbledon is being filmed in 3D this year.

The tournament is one of the biggest and most watched sports spectacles in the world – last year 365 million people watched the tournament, with an average of 12,140 hours of coverage shot – and thanks to Wimbledon's close relations with the BBC, it's a place where many televisual innovations have made their debut.

For instance, 1927 was the year the BBC brought radio to the tournament. TV was introduced in 1937, while colour TV arrived in 1967 and high definition pictures became supported in 2007.

With the arrival of 3D, Sony – which is supplying the 3D cameras – is hoping to bring Wimbledon closer to more people than ever before.

"We think 3D is one way of expanding Wimbledon to a global level," David Bush, Marketing Director of Sony Europe, told TechRadar.

"There's no greater expression of entertainment than the world of sport. So we are delighted to be partnering with Wimbledon. It's a fantastic opportunity to bring people closer to the action with 3D."

It's not all of Wimbledon that's getting the 3D treatment – the men's semi finals and the men's and women's finals are to be shot in 3D. But the question remains: just how will Sony, the BBC – which has television rights – and the folks behind Wimbledon broadcast Wimbledon in 3D?

To find this out, TechRadar was invited behind the scenes to the only 3D trial Sony will be having at Wimbledon, before the tournament itself begins 20 June.

Sony is no stranger to shooting major sporting events in 3D. It was its technology that was used to bring 2010's World Cup in another dimension.

So Wimbledon seems like a natural progression for the company and given that it has also procured the HawkEye technology, it can offer a complete Wimbledon package.

"Sport is incredibly important to us – we can contribute to the whole value chain, from lens to the living room," said Bush.

"The World Cup last year was a very important milestone for us. We shot 25 games in 3D."

The World Cup was something of a test bed for Sony's 3D cameras, as well as Can Communicate, the production company that helped produce the 3D games.

Based in Richmond, London, Can Communicate was one of the first production companies to embrace 3D, so much that it wasn't the 2010 World Cup which it began shooting in 3D, but the one before.

"We actually experimented with 3D in the 2006 World Cup, and when we finished that we thought there had to be another, better way to do 3D," Duncan Humphreys, Head of Production of Can Communicate, explained to TechRadar.

"So we spent time and money in learning how to shoot 3D."

The time and money paid off, as Can Communicate have so far shot 3D productions of the 6 Nations Rugby, 2008 World Ice Hockey final, a Ferrari F1 promo, Usain Bolt in the Great Manchester Run, the Roland Garros Tennis and the FIFA World Cup.

But all this experience is nothing without the industry's support for 3D – something Humphrys believes is finally here, and here to stay.

"In late 2009, technology was a key component and screens started to show 3D content.

"Once broadcasters and Avatar came along, it started a firestorm."

The experience of the World Cup means that the blue print of how to shoot Wimbledon in 3D is already set.

"There were 18 months of R&D which was put into four months' work in the World Cup," said Humphreys.

"In the end we were able to deliver an end-to-end 3D production that nobody thought possible.

"The workflow we used at the World Cup will be employed at Wimbledon. Everything has been streamed down, though, so it makes it easier to handle the 3D production."

When TechRadar walked around the OB truck used for the trial, it's hard to see that this is a streamlined operation – considering that the outside broadcast truck used for the actual Wimbledon finals will be almost twice the size as the one found in the Wimbledon carpark.

This is because it is packed with stenographers and convergence pullers whose job it is to make sure that the 3D shown to TV audiences is the best it can possibly be.

As for the actual shoot, six Sony HDC-P1s cameras will be used on Element Technica rig - three are paired up, while one camera will be shooting the court from above.

The footage from these will all be piped through to Sony MPE-200 processors. These machines will iron out any convergence or interocular glitches that may appear in the live feed. This is why the kit has been given the name of 'stitch' by the production company.

The BBC is also allowing its feeds to be used, so the MPE-200 can also act as 2D to 3D converter for some of the more minor shots.

Sony and Can Communications are reciprocating the favour by making their feeds available to the BBC.

"We have five camera positions – the main 3D camera will be in what is usually seen as the traditional camera two position," explained Humphreys.

"We have two cameras in the pits and two at the other end of the court. We've put all the cameras much lower to create depth. And as it is in 3D, there's not much panning going on.

"Tennis is one of the sports that is designed for 3D. You're close to the action, so you end up with a lot of depth cues."