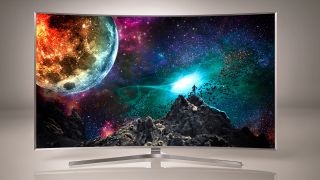 Remember when Microsoft revealed Kinect would quietly listen to everything you said, causing the internet to erupt into furious, anti-Orwellian storm? Now it's Samsung's turn.

A passage from the company's Smart TV privacy policy has been doing the rounds, revealing a small but concerning detail: "Please be aware that if your spoken words include personal or other sensitive information, that information will be among the data captured and transmitted to a third party through your use of Voice Recognition."

The idea of our personal information being captured by any sort of technology should make anyone uncomfortable, but it's that mention of a "third party" which is most disconcerting.

However, Samsung has tried to offer some reassurance. It told TechRadar it "does not retain voice data or sell it to third parties".

"If a consumer consents and uses the voice recognition feature, voice data is provided to a third party during a requested voice command search. At that time, the voice data is sent to a server, which searches for the requested content then returns the desired content to the TV."

It added: "Samsung takes consumer privacy very seriously. In all of our Smart TVs we employ industry-standard security safeguards and practices, including data encryption, to secure consumers' personal information and prevent unauthorized collection or use."

The company added that you'll know if the voice recognition feature is active because a microphone icon will be present on the screen. Samsung also reminds us that the feature can be activated or deactivated by the user.

And of course, the TV owner can also disconnect the TV from the Wi-Fi network entirely, although that somewhat defeats the point of having a smart television.

That might help some people sleep more soundly at night, but as the Internet of Things starts to consume our daily lives, this certainly won't be the last (or the worst) privacy scare.

Should we fear the Internet of Things?