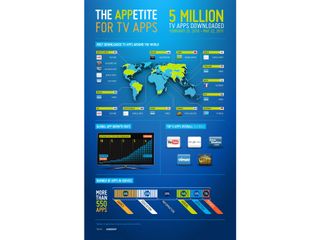 Samsung has revealed that its Samsung App store – the first of its kind for televisions – has passed the 5 million download mark.

The store was launched back in February 2010 and it initially took until December of that year to hit 1 million downloads, but this number doubled by the time January 2011 rolled along.

The pace has picked up even more, with the total downloads now at 5 million.

The most downloaded app, according to Samsung, is YouTube, followed by Google Maps, AccuWeather and Vimeo.

Currently there are around 550 applications that have been made especially for viewing on a TV.

"The TV is a family-based device and people want to lean back and enjoy their time in front of the TV," said Kang-hyun Kwon, senior vice president, Media Solution Center, Samsung Electronics.

"These apps are the entry point for consumers to discover other experiences on their TV like gaming and social networking as well as the limitless possibilities being created by our third-party developers."

In March Samsung announced that the total apps downloaded from the Samsung App Store – for both phones and televisions – was an impressive 100 million downloads.

One of the latest apps Samsung has announced is a 3D VOD service, which is available on its its D5520 TV entry level LED Smart TV range, all the way up to the flagship D8000 series.