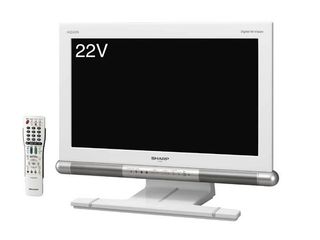 HD TV on a 22-inch set seemed impossible just a year ago.

Next time you go shopping for a second television set for the spare room or bedroom, chances are it might be one of a new breed of smaller full high-definition TVs, such as the new models introduced today by Sharp.

The latest Aquos LCDs from the Japanese company will go on sale there at the end of November and include the world's smallest full HD TV, which has a diagonal screen measurement of just 22 inches; far smaller than the 40-inch-plus displays common in the HD marketplace now.

Sharp has also made all three televisions suitable for hooking up to a PC by including a range of analogue and digital connectors and a keyboard-stowage area on the base of the stand.