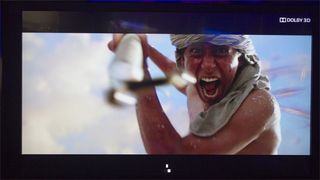 Sharp showed off a lot of TVs this year at CES 2014, not least of which was the

, an enhanced full HD TV that is capable of playing downscaled 4K content.

But while some Sharp engineers are busy reducing resolutions, others keep increasing it, and the company also showed off two 8K sets in its large booth on the convention floor.

The first is something we've seen before, though according to Sharp it looks better than ever this year: a large 85-inch 8K TV that looks unbelievably crisp and vibrant.

But much more interesting is another variant of the 85-inch 8K set - one that we haven't seen before. And this one has glasses-free 3D as well.

Glasses-free 3D is difficult to pull off, especially on television screens, because the ideal viewing angle for such tech is usually fairly narrow.

Sitting outside of the "sweet spot" results in a blurry image, much like tilting a Nintendo 3DS to the right or left with the 3D slider turned up.

Sharp hasn't completely solved that problem with the 3D-showing 85-inch 8K prototype it showed off at CES, but it seems the company has improved the situation and implemented a workaround or two.

For one thing, Sharp's new glasses-free 3D TV has 28 separate, narrow sweet spots located three to four meters away from it, instead of just one sweet spot directly in front of it. That means viewers can sit all around the room and still witness the 3D effects without any (well, much) blurring.

Sharp showed this TV off with footage from the film Life of Pi. That movie was made to be watched in 3D, and because of that, the TV's enormous size, and the screen's 8K resolution, it truly did look fantastic - like nothing we've ever seen before. And the 3D effect was large and in charge, clearly visible despite the lack of 3D glasses.

That said, having to shuffle around the room a few inches at a time to find an ideal viewing angle is not an ideal system, and until that gets worked out we doubt anything resembling this product will hit shelves.

And it's easy to imagine one's eyes growing fatigued of the effect, however dazzling it may be at first, over long viewing periods.

That said, there's every chance in the world that this will all improve in the future.

Sharp Senior Product Manager Tony Favia told TechRadar that although its two 8K TVs (the 3D and non-3D) are definitely still prototypes, Sharp expects 8K TVs to hit the market "within the next few years."

"It will probably be appearing in Japan and some of our overseas markets, you know, maybe sooner than that," he said.

"There's no real clear indication of exactly when it becomes productized at this point, but Sharp is expected to be at the forefront of that when it happens. We've got the technology. We can productize is very easily. So we expect to be leading the march to 8K even though the timing is a little bit uncertain."

He added that Sharp's 8K display technology continue to improve as Sharp's engineers "have more and more time to attack it."