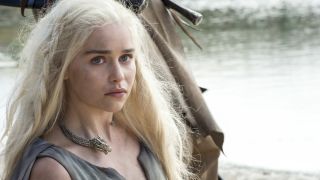 With just a couple of months left until season 6 of Game of Thrones lands on the small screen, HBO has decided to tease us with a series of new spoiler-riffic photos.

HBO's slew of new images finally gives us a glimpse of where we'll find some of our favorite characters this year. It's especially interesting as season 6 will be treading new territory, what with G.R.R. Martin's sixth book in the series, The Winds of Winter, still to be released.

If you don't want any spoilers for the new season, we suggest you stop reading now. If you want to spend the rest of the day figuring out what season 6 will bring, continue on.

The 23 images show, among other things, Arya blinded because of her betrayal of the Faceless Men, Jaime Lannister bringing home a dead Myrcella, Margaery Tyrell still with the Sparrows, Tyrion hanging out with Varys and Bran up and standing with the Three-Eyed Raven, likely in a vision. You also have the above image of Daenerys, wearing her fancy dragon necklace and looking like she needs a bath, even though she's near water.

Unfortunately, there's no sign of Jon Snow, but everyone near any spec of snow is looking pretty grim. And there's no clue as to when, in the season 6 timeline, these images fall, though we'd guess it's in the first episode.

We'll leave one more image below, showing Sansa Stark and Theon Greyjoy still together. If you're hungry for more images, you can head over here.