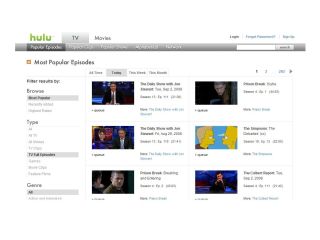 In a bid to build up a bit of publicity for new shows, TV companies are looking to the web for pre-release buzz.

While this isn't new, with the likes of YouTube showing snippets of not-yet-aired programming, Hulu, a website co-owned by Fox and NBC, is to air season openings of shows.

The shows shown on Hulu before they air on TV include the Knight Rider reboot – which stars Val Kilmer KITT's voice – and Lipstick Jungle, the latest from Sex And The City creator Candice Bushnell.

Hulu.com is a US-only website that houses shows, ready to watch anytime and for free.

In the states it is seen as one of the biggest rivals to YouTube, offering better picture quality and an array of HD clips.

NBC who is letting some of its shows air on the site first has come under some scrutiny, however, due to some of its biggest shows – The Office and superhero event drama Heroes – not airing on the site before their TV debut.

This has lead critics to believe that it is only shows that are likely to get lukewarm reviews that are taking part in this 'web-first' initiative.