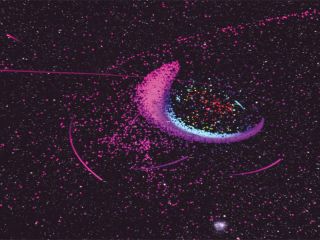 You can choose to colour simulations, giving you a useful (and pretty) map of the various velocities and gravities involved

Universe Sandbox isn't a game, yet we feel a million feet tall and can shoot moons out of our fingertips. As experiences go, that's unique. The fact that we recently smashed two distinct galaxies together to see what happened (a boiling mess of stars and obliterated matter, if you're wondering) is neither here nor there.

The word 'sandbox' is frequently bandied around, often without the required clarity. We're sick of seeing 'physics sandboxes' that consist of nothing more than a basic physics engine and some cubes. The next time someone describes a generic open-world game as a 'sandbox', we shall scream.

Construction-heavy Second Life, perhaps; Built-for-you GTA, no. Which is why we're a little conflicted when it comes to Universe Sandbox.

It's not a big scientific application, you see. You won't find every strand of complicated physics replicated in this copy of the universe. There's no General Theory of Relativity, which essentially ensures that none of us will be relying on it's asteroid impact predictions to save us from exploding sky death.

It seems more like a toy designed so that easily stimulated minds like ours could bash a couple of universes together and giggle with childish glee. The author, Dan Dixon, admits on his website that the code isn't entirely stellar – while it makes use of Newtonian physics, it's a "brute force n-body algorithm" which does most of the work – but there are so many variables in the universe that true simulation would be impossible. That such a high-level sim can occur on such little processor overhead is, therefore, remarkable.

Development has progressed steadily over a number of years. "Fifteen years ago in high school I came across a very simple gravity simulator and decided to write my own," Dixon told PC Plus magazine. "With some help from my Dad, who also inspired my love of astronomy, I wrote a very simple simulator back in 1993. I revised this idea in 1997 and created the first 3D version in 2000. Older and wiser, I began working with the idea again in 2007 but this time I kept going."

Universe Sandbox seems to have benefited from this loose development structure – unconstrained by a concrete plan, Dan Dixon just let his enthusiasm drive the project along. "I would add a feature, get it working, and then move to something else. There was never a specific plan: I was just making something that I wanted to play with. And I discovered that others wanted to play with it too."

And why does Dixon feel the project is so appealing? "I've always been interested in the fascinating motion [generated] from such simple maths," he says. "Yet unlike fractals, which are less tangible, the maths behind gravity is so clearly epic and beautiful."

As a teaching aid, we can't think of much better. Showing your audience the movement and relative size of the solar system will certainly be an eye-opener under the auspices of Universe Sandbox's crisp, anaglyphic 3Dcapable graphics engine, as will lining up the bodies in the solar system in size order then having them career into the sun.

Universe Sandbox is full of entertaining demos and effects that put you in the middle of some fairly improbable situations. "Most of the 'Fun things to Do' activities are simulations that I created to entertain myself and my brother," says Dixon. "I really like playing with particles while wearing 3D anaglyphic glasses. I'll often find myself adding rings around bodies and then introducing massive planets to twist and distort the rings into strange, organic shapes."