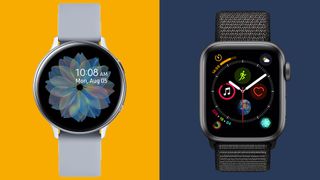 The Samsung Galaxy Watch Active 2 is perhaps the closest rival yet to the Apple Watch 4, as like Apple’s latest wearable it sports an ECG (electrocardiogram) – something you won’t find in many other places.

The two devices also have a full assortment of smart and fitness features, but they’re far from identical.

With that in mind we’ve put them head-to-head, so you can take a closer look at exactly how these two top smartwatches compare.

It comes in either a 44mm case size with a 1.4-inch screen, or a 40mm one with a 1.2-inch screen, and you can get it with either an aluminum body and a rubberized strap in Cloud Silver, Aqua Black and Pink Gold, or a stainless steel body with a leather strap in Silver, Black or Gold. In either case it supports interchangeable 20mm straps.

The Apple Watch 4 on the other hand has a much squarer screen, with a digital crown on the right edge. Like the Galaxy Watch Active 2 though it comes in 40mm and 44mm case sizes and can come with either an aluminum or stainless steel body.

Opt for aluminum and you can get it in Silver, Space Gray or Gold, while the stainless steel version is available in Silver, Space Black or Gold. You can also get it with a range of sporty and metal straps.

Both the Apple Watch 4 and Galaxy Watch Active 2 are also water-resistant to 50 meters, so the main design difference between them is the shape of the screen.

The two big new features for the Samsung Galaxy Watch Active 2 are things that Apple in one case already offers and in the other offers something comparable to.

First up there’s the ECG (electrocardiogram), a feature that lets the Galaxy Watch Active 2 measure the rhythm and electrical activity of your heart, to pick up things like atrial fibrillation. This is something the Apple Watch 4 has too, but is quite a big deal, as no other mainstream, on sale wearables offer it.

The other big new feature on the Galaxy Watch Active 2 is its ‘digital rotating bezel’, which is a digital bezel along the edge of the screen that you can run your finger along to move through menus. It’s essentially a digital take on the physical dial we loved so much on the Samsung Galaxy Watch.

The Apple Watch 4 doesn’t have this, but it does have a digital crown which you can use to navigate the watch, which is somewhat similar.

Both watches also come in LTE flavors, which is a big deal if you want to be able to leave your phone at home.

They also both have a heart rate monitor, GPS, NFC, and a full suite of fitness features, including the ability to track numerous sports and exercises.

The Samsung Galaxy Watch Active 2 runs Tizen, while the Apple Watch 4 runs watchOS. Those are two of the biggest differences between these wearables, and in the Apple Watch’s case means you should only consider it if you have an iPhone, as the software isn’t compatible with Android.

Tizen on the other hand is compatible with both mobile operating systems.

As well as a differing interface and compatibility, one other difference between these operating systems is the AI assistant you can call on. You get Siri of course on the Apple Watch 4, while the Watch Active 2 relies on Bixby. That’s arguably a point in Apple’s favor, though Bixby is gradually improving.

As for core specs, the Samsung Galaxy Watch Active 2 has a dual-core Exynos 9110 chipset, 4GB of storage and either 768MB or 1.5GB of RAM, with the larger amount being reserved for the LTE model.

The Apple Watch 4 on the other hand has a dual-core Apple S4 chipset and 16GB of storage. RAM isn’t detailed.

It’s also worth mentioning battery here – the Samsung Galaxy Watch Active 2 has a 230mAh one with life rated at up to 2 days if you opt for the 40mm model, or a 340mAh one in the 44mm version. That larger one presumably lasts longer, but we’ll be sure to properly test it in our full review.

The Apple Watch 4 meanwhile supposedly has a battery life of up to 18 hours – though in our tests we found it could last up to two days. Apple hasn’t said how big the battery is, though.

If you want an Apple Watch but don’t have an iPhone then the Samsung Galaxy Watch Active 2 looks to be the closest thing you can get, though it’s still fairly different, most notably when it comes to the screen shape, the operating system, and its digital rotating bezel.

The name and price also position it as a less premium, more fitness-focused offering, though given that it can be bought with a leather strap, and that the Apple Watch 4 actually has a similar assortment of fitness features, that position doesn’t hold up to much scrutiny.

As to which watch is better, that’s likely to be subjective, but keep an eye out for our full Samsung Galaxy Watch Active 2 review to get a clearer idea.