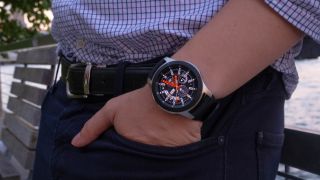 The Samsung Galaxy Watch is nearing its first birthday, and we may see a next-gen version of the device launch in the near future to celebrate.

The invite for the company's big Galaxy Note 10 launch on August 7 includes a hint that we'll be seeing more than just the phone, and there's a good chance we may see a new smartwatch from the company.

In an accompanying email to the invite, Samsung said it "will unveil new devices designed to take the Galaxy ecosystem’s connectivity to the next level." Take note of the word "devices", which seems an intentional hint that it won't all be about the Note 10.

Although that's not confirmation of a new smartwatch, it would make sense for Samsung to unveil a new Tizen-sporting device alongside its next-gen Note phone.

The original Galaxy Watch was unveiled alongside the Galaxy Note 9 in August 2018, while the Gear Sport was introduced alongside the Note 8 a year earlier in August 2017. The Gear S3 was launched a little later in the year before that during November 2016. So this seems a likely venue.

Recent Samsung wearable devices have also been unveiled alongside phones, including the Galaxy Watch Active, Galaxy Fit and Galaxy Fit E, which were all revealed at the company's Galaxy S10 event.

We've also seen leaks of the Galaxy Watch Active 2, so that may alternatively make an appearance, or these "devices" may be totally unrelated to the company's wearables.

We could instead (or as well) see new tablets, DeX products or accessories launched alongside the Note 10, but if you're looking to buy the Galaxy Watch you may find it worth waiting until August 7 to see if there's a better device in the works.