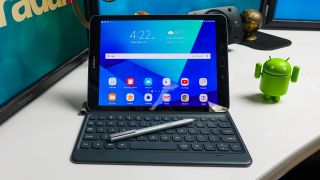 We’ve only caught a few glimpses of the Samsung Galaxy Tab S4 so far, but today a couple more have emerged, one of which includes the optional keyboard case that you’ll likely be able to get for the tablet.

The images, shared by reputable leaker @evleaks, show the Galaxy Tab S4 in either white or silver. In the first image you can see that it has at least two speaker grilles, large bezels around the screen, no buttons on the front and a detachable keyboard cover.

A second image shows the rear of the tablet without the cover, highlighting the single-lens camera, the claim that it’s tuned by AKG, and the otherwise fairly plain design.

The images also contain the new S Pen, which appears to have a glossier finish than the Samsung Galaxy Tab S3’s and lack its clip. The redesign may mean this S Pen has the same rumored Bluetooth features as the Samsung Galaxy Note 9’s S Pen, but that’s just speculation for now.

Really, the images don’t show much that we haven’t seen before, but they do match up with an earlier leak, complete with the August 24 date shown on the screen, which might be when the Galaxy Tab S4 will be announced.

For a launch that soon we know surprisingly little about the device, but an earlier benchmark suggests it might not be quite as high-end as Samsung’s flagship phones, with the slate seemingly using the Snapdragon 835 chipset (which dates back to 2017), along with 4GB of RAM. We should know for sure soon.