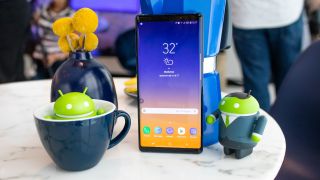 The Note 10 specs come courtesy of noted leaker Steve H. McFly in a two-tweet flurry. The biggest revelation? Both phones are, in fact, getting the new higher-powered Snapdragon 855 Plus chipset, which goes against a previous report claiming they’d get the standard Snapdragon 855.

That alone puts them ahead of the Galaxy S10 family released in March.

The specs also note that the alternative chipset is the Exynos 9825 (presumably for handsets going to non-US regions), despite prior rumors asserting it would get the slightly older Exynos 9820.

Note (har) the differences between the normal version and the Note 10 Plus: a larger 4,300mAh battery, a Time-of-Flight sensor, and a larger 6.8-inch screen – all of which appeared in previous Samsung Galaxy Note 10 leaks.

Also cool? The S-Pen with “Air Actions” gestures - which could be the ‘gesture control’ we heard about in a very recent rumor.

And while we’re still not totally clear how fast the Samsung Galaxy S10 phones’ battery-donating Wireless PowerShare feature is - one PhoneArena report claims 4.5W - these leaked specs suggest the Note 10 will be able to use its version of the feature to pump out 15W of power. Not bad for wireless charging!

Today's Note 10 specs leak also details the rear cameras: a triple-lens setup with a main 12MP wide, a 16MP ultrawide and 12MP zoom lens (along with the aforementioned ToF depth lens on the bigger Note 10 Pro phone). Sound familiar? It’s the exact same setup as the rear cameras on the Samsung Galaxy S10.

Or is it? Samsung has packed its flagships with dual-aperture main lenses - in the S10’s case, that 12MP wide - that automatically switches between f/1.5 and f/2.4 depending on the level of light. But another new rumor on SamMobile reaffirms a previous prediction that the Note 10 phones will get a third aperture setting - f/1.8 - for more nuanced phone photography.

That new Note 10 camera rumor also touches on another inconclusive feature: whether or not it will get a microSD slot. The report claims it won’t, but asserts that the bigger Note 10 Pro will get one.