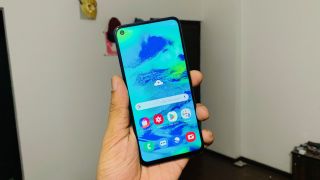 Samsung has announced the launch of Galaxy M40, its fourth smartphone in the youth-centric M-series.

Unlike the previously released M10, M20 and M30, the M40 features a Galaxy S10-like punch hole display, which the company is calling the Infinity-O.

The phone is priced at Rs 19,990, which makes it the only phone in the segment to feature a punch-hole camera design. It packs a 6.1-inch FHD+ screen with, powerful Snapdragon 675 octa-core chipset with 6GB RAM and 128GB internal storage (expandable up to 512GB).

It draws power from a 3,500mAh battery with 15W USB Type-C fast charging. We must note that Samsung has removed the 3.5mm audio jack without making any noise and that might be a big deal breaker for its loyal users.

It runs on Android 9.0 Pie with Samsung's One UI skin on top.

Samsung claims it to be a perfect camera to keep a Millenial's social media feed up and running with creative and attractive shots. While that's a big claim to make, we'll test it out and find out how does it stand against the competing smartphones from Xiaomi, Realme and similar.