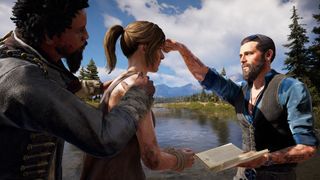 When you first step into the world of Far Cry 5 you get the sense that you’re coming into something that’s living – the flags are fluttering, the environments are colorful and the characters more so.

However, underneath the colors that are almost brighter than real life, in our short hands-on time with the game we've caught glimpses of a grayness that runs deep into its narrative core. This isn’t a negative grayness exactly – it’s a grayness that promises a narrative subtlety that we can’t remember seeing in Far Cry before.

After a couple of hours with the game, we sat down with lead writer Drew Holmes to discuss what we experienced, suspected and what else we can expect from the game upon its full release.

A lot of what makes the world of Hope County, Montana feel so alive is that it’s based on our own world. “There are a lot of games and a lot of franchises that sort of do take historical and factual elements and build their world around that” Holmes explains, “For us we like to start with that palette and then start to paint with our own brush.”

It’s Ubisoft’s own brush that has made the setting of Hope County so much larger than life and a character in its own right.

According to Holmes, “you start with the things that are familiar – Montana, a doomsday cult, like those things that have existed before and you can draw from. But then with this stuff influencing in the background you can create those strong characters that pop.”

Each region on the game’s map is protected by a different member of The Project and as you’d expect, there’s some distance between yourself and the main cult leaders you’re looking to take down – you won't take them on straight away. With distance comes mystery, intrigue and a sense of apprehension. But to have any motivation to take these bad guys down and you’re going to need to know something about them – that’s where the environment comes in.

“Each region is a reflection of that bad guy’s influence in it,” Holmes elaborates, “So you see a lot of posters of John [in his region] because he’s sort of stylish, he’s that creepy televangelist. Which is very different to the feeling that you get with, say, Jacob.”

Taking the separate elements of each region and bringing them together, though, will give you a clearer picture of the man at the center of everything: “It’s all centered around the Father whose ideology is very clear. You come to understand what it is he’s after and why through the course of the game.”

By using the game’s environment to reveal more about its characters and their motivations, Holmes has crafted a narrative that he hopes will reach the player without them necessarily realizing it.

"We ensure that the villains and heroes influences and presences are felt throughout the world so that you don’t necessarily have to pay attention to every single story - you can pick up a lot of things just by immersing yourself in the world.”

If you take the time to scrape under the red, white, and blue surface of Far Cry 5, though, there are grey details that have the potential to be worth some thought and consideration.

While it’s not everyone that will be interested in digging deeper than the fun of chaos and destruction that Far Cry offers, Holmes’ team appears to be attempting to make it as easy as possible by marrying the game’s myriad side quests to its main story.

“For me I just want everyone to experience everything, to read all the notes, listen to all the messages” laughs Holmes, “But the structure of the game was not that intention. It was about what do you feel like you’re experiencing. That’s really why we coupled the main story with everything you can do in the world. The more open world stuff you see in previous Far Cry games, that’s all a part of what we’d call the main story now. That’s what’s driving interactions with the cult, with John, with Jacob.”

Certainly, we noted that every action we took in the world, whether considered a main story quest or something less consequential added to something called our 'resistance points.'

Once you've collected enough resistance points you'll draw the cult leader for that region out from their bunker to face you and push the story forward.

There's a weighting in terms of which kinds of quests earn which number of points in the favor of story-based quests but it's somewhat positive that no matter what you choose to do in the game on any given day, whether you're taking five minutes to rescue a captive or taking down an entire compound, is still pushing the game's main story forward in some way and pushing you towards a moment of consequence. It gives every activity on Far Cry 5's large map a reason for being there.

This means that in a single playthrough you can have days dedicated to narrative digging or days devoted to destruction and never miss out: “we have key beats in each region as you’re moving through but you may find you’ve not met certain characters like Pastor Jerome or Mary May yet. Every once in a while, if a scene was mo-capped, we’d shoot a couple of different versions. This would account for moment of ‘okay you’ve done x and y but you haven't done z’ so this scene won’t play.”

There are many characters scattered across the game world that you can interact with and because of this adaptive narrative approach you never have to miss out on them just because you’ve unknowingly reached a narrative point-of-no-return.

Holmes gives us an example of this in the character of Nick Rye whose story is different depending on when in the game you go to see him. Dialogue has to reflect players choices, Holmes says, “It’s little tiny tweaks so that it still feels like characters are still plugged into that world and don’t live in little tiny bubbles. We still want people to be able to pop in and experience it. We don’t want to take anything away from you just because you chose to play a certain way at some point.”

It’s digging into this narrative grayness that will bring even more dimensions to the game world and give it greater depth and life.

There’s also a certain moral grayness in the game’s colorful characters that lends them a believable complexity and the world a sense of genuine variety.

Naturally Far Cry 5 is aiming for the kind of engaging villain that the series has become known for. Writing a cult leader must, we posit to Holmes, be rather difficult – you need to make it clear that they’re bad and their approach is wrong but at the same time you have to make it understandable and believable that they’d be able to amass a loyal following.

“I think really it’s empathy,” he says, “Joseph Seed is clearly a crazy person and God has told him he needs to save these people whether they want it or not and that somehow justifies all of this murder. But at the same time his message is one that I think at some level can resonate with a lot of people because it’s about the world that we find ourselves in feeling like it’s on the edge.

"It feels like a storm is coming and we don’t know what’s going to happen – you feel disenfranchised, you feel like the powers that be aren’t working in your favor and that’s the message that he’s giving these people it’s drawing them in. That’s sort of how you’re like ‘I get what you’re saying’ and then he just twists in a way that makes you go ‘no no no.’ That’s why the town and the citizens rise up against him. They don’t agree with the methods.”

However, the side characters you have the option to work alongside are also engaging and complex and it’s they more than the game’s villains that bring a sense of place to Far Cry 5’s Montana. We hesitate to call them heroes because in Far Cry 5 the realism extends beyond the setting to encompass the people that live in it. None of them are outright good or bad, they’re just less hell-bent on harming others than The Project at Eden’s Gate.

We haven’t met close to everyone yet, but everyone we did meet had a slightly unsavory side and highly self-serving motivations. Except Boomer the dog. Boomer is pure.

“I think that the world is varied and the world is shades of grey and I think that there’s a conscious effort on our part” acknowledges Holmes, “We knew we wanted to have a lot more characters in Far Cry 5 than we had in 3 or 4. There are maybe 10 characters of note in each game previously and a lot of them were in cinematics or villains so you didn’t have a lot of time to spend with them and you didn’t really have a lot of chance to understand their point of view.”

This time, Holmes says the development team has “set a really high bar in terms of the characters you meet in the open world” and tried to make them as varied as possible.

A wide range on the range

“Far Cry goes from serious and scary to whacky and crazy” he tells us “We’ve got the more earnest characters [like Mary and Jerome] more connected to the main cult storyline [...] but at the same time Montana has a very vast cast of characters that like to be left alone and that’s represented in characters like Zip and Larry.”

It’s these characters that exist parallel to the action that have allowed Far Cry 5’s writing team to “lean into comedy in a way the brand hasn’t before” and give players a “breather” from “doom and gloom.”

Drawing from real-world anxieties as it does, it’s good that Far Cry 5 also wants to make players laugh and we certainly saw evidence of its tongue-in-cheek humor in our hands-on play. It’s a humor that reminded us very much of the Grand Theft Auto series.

Characters like Zip exemplify this Holmes explains: “Zip’s ethos is that he is violently against the government but he believes in his fellow man and he’s absolutely an animal lover [it’s worth noting that in one particular Zip mission you are not especially benevolent towards animals] and you get these sort of opposing conflicting viewpoints and then you bring in really good writers to help shape those characters and that’s when really fun stuff starts to happen.”

Is this slant towards humor an attempt to skirt around difficult subjects? It certainly does make the game’s chosen villains and subject matter feel less pointed. Thus far we’re getting a sense that Far Cry 5, while following its tried-and-tested gameplay formula, is attempting to be somewhat more courageous and engaging with its narrative without being unduly provocative.

“I think you can’t be afraid to be bold” says Holmes with a firm nod, “Choose adult themes, choose subject matter that hasn’t been touched in games before and do it in a way that’s nuanced and isn’t obvious.

"There are scenes in the game and choices we made in the casting that people were sort of taken aback by, saying like ‘it makes me uncomfortable.’ That’s good for us – it means that we are taking risks and not in a provocative ‘doing it for the sake of doing it’ way. It’s relevant to the characters and relevant to the story.”