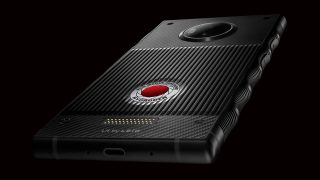 While Red's first foray into the smartphone market failed to live up to the digital cinematography company's stellar reputation, its founder Jim Jannard has today confirmed that a much-improved follow-up to the troubled Red Hydrogen One handset is in the works.

In a candid post on Red's own H4Vuser.net forums, Jannard placed most of the blame for the Hydrogen One's failings on an unnamed Chinese ODM (Original Design Manufacturer), saying, "Getting our ODM in China to finish the committed features and fix known issues on the HYDROGEN One has proven to be beyond challenging. Impossible actually."

However, it appears the phone's successor is on the right track, with Jannard explaining that "after months of vetting a new design to manufacture [in-]house, we have begun the work on the HYDROGEN Two, virtually from scratch, at a new ODM that is clearly more capable of building and supporting the product we (and our customers) demand."

Based on Jannard's comments, it seems the Red founder isn't taking any chances on the handset's second iteration, revealing that the company has "put into place a new internal execution team along with world class design-partners that we have carefully selected."

While the original ODM was unable to deliver on the promise of the Hydrogen One's planned camera module, the digital cinema camera maker has announced that a new sensor has been designed in-house at Red which will integrate with both the Hydrogen Two and its predecessor.

"We have completed the new and extraordinary sensor and redesigned the package," explained Jannard, further stating that, "While it does not replace its big RED brothers, it will certainly be a complimentary camera for cinema grade images at the highest level at lower pricing."

Although it's too early to reveal release date and pricing information, Jannard assured fans that "every HYDROGEN One owner will get significant preferential treatment for the HYDROGEN Two and/or new Cinema Camera model, both in delivery allocations and pricing".