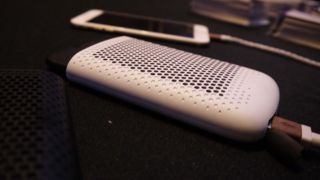 Battery chargers aren't exactly the sexiest gadgets in the world, but when you add fuel cells into the mix things get a little more interesting.

MyFC is showcasing its Jaq fuel cell charger at MWC 2016, the world's smallest charger of its type. The device, which has gotten its European debut, offers up speedy phone charging without the need to ever go near a plug socket.

This is because Jaq powers itself with the help of its own PowerCard - which is made of water and salt. Stick this in the charger and by some chemical magic hydrogen is created and your charging can begin. It will charge a phone in the same time as a normal power outlet.

The MyFC Jaq is compatible with all phones and tablets, including iOS, and will be available in white, black and purple.

Although there's no release date as of yet, MyFC has put the Jaq up for pre-order, where you can also sign up to having Power Cards sent to you on a subscription basis.