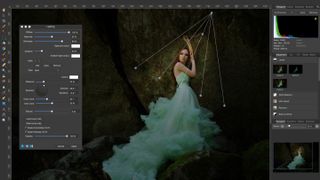 Serif took a bold gamble with its Affinity series, producing brand new professional level Mac applications for photographers and designers, in the form of Affinity Photo and Affinity Designer. Previously best known as a developer of low-cost windows software, Serif is pitching its new Affinity apps at professionals – even though they're on sale at extremely competitive prices.

The new technology will also allow the precise alignment of image 'stacks' for tasks as simple as object removal or the blending of multiple exposure composites.

"The accuracy of panorama stitching in the app really is as good as it gets – and with Affinity Photo's advanced memory management you can build up images of 100s of megapixels and still have incredible performance when you go to edit," says Ashley Hewson, Serif's Managing Director.

Mac owners who've upgraded to El Capitan now have access to Apple Photos' 'extensions' architecture. This is not unlike the plug-in architecture for Photoshop, whereby third-party developers can add software tools that can be accessed directly from Photos.

There are a few Apple Photos extensions out there already, but Serif has hit the ground running by releasing no fewer than six with Affinity Photo 1.4:

"Opening up the ability for developers to produce extensions for Photos was a big part of the El Capitan update, and it's been fun writing for it," says Hewson.

Other new features and improvements in Affinity Photo 1.4 include canvas rotation, PDF/X and spot colour support, filter additions, adjustment layers and blend modes, and improvements to Photoshop PSD file compatibility – this will be an important factor in persuading Photoshop users to migrate.

Serif's been keen to point out that its software is sold as a conventional licence and not as a subscription, and has committed to releasing regular free updates for "at least the first couple of years".

Serif's vector art app Affinity Designer has been updated at the same time and both updates are available now via the Mac App Store.