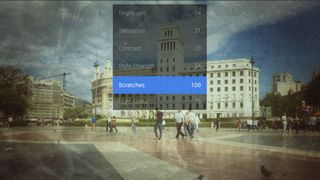 Snapseed was launched by Nik Software as a low-cost desktop photo effects/editing tool, but when Nik was bought out by Google, the search giant ditched the desktop version (NOOO!), moved its tools online for editing images via Google+ but – crucially – kept the free iOS and Android versions.

If you own a mobile device and you take and edit photos, then Snapseed is practically a must-have – or at the very least, it's worth a long, hard look – because of the way it combines simple one-tap effects with surprisingly deep but accessible editing tools.

It's really easy to use. You pick a Filter – Lens Blur – for example and use a touch-and-drag on-screen gadget to move it around and control the size and strength. Other filters use touch-and-drag menus displayed directly over the image and a sideways drag to change the strength of that parameter.

The effects are so good, and so quick to apply, that you do really wish you could do that same things in high-powered pro tools like Photoshop and Lightroom.

But the way you can combine and rework these effects has been transformed.

Previously, you could apply multiple effects in sequence, but with no way of retracing your steps later, or re-adjusting individual effects. Now, though, Snapseed 2.0 saves your adjustments as re-editable layers (or 'Stacks' in Snapseed-speak) – it's like the power of Photoshop's non-destructive adjustment layers and smart objects, but in a free mobile app.

The control goes even deeper – you can now use Brush tools to apply effects to selected areas of an image rather than the whole thing.

It's also possible now to copy a set of adjustments from on image to another (always a limitation in the previous version) and there are five new filters, plus a Transform tool that can adjust perspective across vertical and horizontal axes and can even fill in empty areas around the edges of the image afterwards.

Not everyone is happy. Snapseed's Grunge filter is gone and some don't like the new UI and Google's design choices. On balance, though, Snapseed 2.0 has had a major power boost, particularly in 'reversible' editing.

Snapseed 2.0 is out now. If you've got the old version you've probably got the update already, so just check your apps. Or, if you've not used Snapseed before, you really should try it because the effects and in-depth control are amazing in a free mobile app.