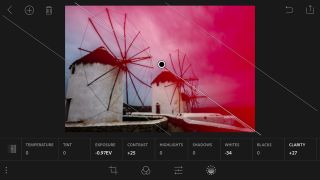 Adobe has announced version 2.4 of Lightroom for iOS, with a couple of major improvements.

The most notable of these is a new raw technology preview, allowing you to share your best quality image on the go rather than either having to make do with an average JPEG or waiting until you get home.

With the updated app you can import your raw files from your camera on the go to your iPhone or iPad, edit them (you can adjust white balance, recover lost detail in the highlights and shadows and make selective adjustments - more on that in a moment), before sharing them.

A nice touch is that Lightroom for iOS can be synced with Lightroom on other devices, transferring over any adjustments, star ratings, or flags you've added, so you can speed up your workflow once in the comfort of your own home.

What's also impressive is the level of raw compatibility, with Lightroom for iOS supporting all the same raw files that Lightroom for desktop does.

How do you transfer images?

You won't be able to simply ping the image from your camera to your iPhone or iPad wirelessly however. To transfer raw files across you'll need either a camera connection kit or Lightning to SD or USB kits from Apple.

This will bring up the Import tab with the iOS Photos app, with imported files added to your camera roll, which you can then select and bring into Lightroom for iOS to edit.

Due to the considerably larger file size of a raw file compared to a compressed JPEG, import times can be quite a bit longer, while they also take up more space on your device.

There's obviously the worry that performance could be a bit clunky due to the large files being handled, but Adobe stresses they've put the app through its paces, even testing it out a 50MP raw file from a Canon EOS 5DS on an iPhone 6.

As we've touched on, you can now perform local adjustments, both linear and radial, making them great options to add drama to skies or lighten or darken elements of the image.

Other improvements include keyboard shortcuts with physical keyboards connected to iPads, add your copyright to all imported photos and lens profiles (if your camera and lens combination are supported).

This looks like it could be a huge jump for Lightroom for iOS, and certainly something for photographers who shoot raw (and why wouldn't you?) to get excited about.

The ability to edit raw files from your iOS device on the move (provided you've got the connectivity and space on your device) is something that's been missing from Lightroom's mobile offering.

This not only allows photographers to showcase and share images at the best they can be on the go, but also speeds up and streamlines their workflow, with edits carried over into their Lightroom catalogue.

Available now for both iPhone and iPad from the iOS App Store for free, but you will have to be signed up to Adobe's creative cloud subscription to take advantage of these updates - currently £8.57/$9.99 per month for access to both Lightroom CC and Photoshop CC.

Things are a little different of Android users, with the focus being on the end-to-end DNG capture experience.

The built-in camera now has a new Pro mode, letting you take control of the shutter speed, ISO, white balance, and focus all manually, in a brand new interface that also has a new Lightroom Camera widget.

Lightroom for Android 2.1 is available to download for free.