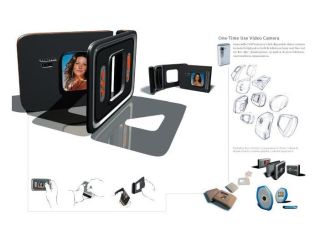 A US industrial designer has come up with a new disposal video camera concept that could take the pain out of filming those special family events.

The concept has been designed to replace the current Pure Digital One-Time Use camcorders that are currently sold in US stores such as CVS Pharmacy .

Jennifer Murphy says her concept will beat the current model for a number of reasons: "Issues with CVS Pharmacy's first disposable video camera include its high price - both its initial purchase and the cost for the clips' development - as well as its poor interface, and mediocre appearance," she says.

The designer's version requires only that you take the part containing the footage back to the chemist for processing instead of the whole shebang... a bit like handing over a film.

Murphy says: "When the customer returns [the new CVS camera] to the store, he pays for the development of the DVD footage and a new piece at the price of about $15; one-third of the current camera and development costs."

Pure Digital's One-Time Use camera was originally released in 2005 as a cheap alternative to buying a full-priced camcorder. Customers simply pick one up from CVS stores, film on it, and then take it back to CVS where the footage is transferred on to DVD.