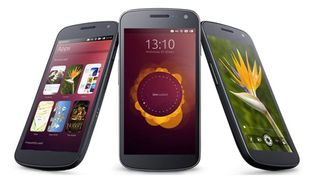 Hitting stores in October, can Ubuntu be number 3?

While iOS and Android rule, and Windows Phone dukes it out with BlackBerry for third, a new player will enter the smartphone fray in Q3 this year.

Ubuntu powered phones will be on store shelves in October, according to Canonical CEO Mark Shuttleworth in an interview with the Wall Street Journal. He also says that app developers will get access to the latest build by the end of February, so long as they have a Samsung Galaxy Nexus to install it to.

Developers are being lured by the promise that native apps written for Ubuntu phones will also work on desktop computers, and vice versa. Hopefully this fills the Ubuntu app store for richer offerings than we tend to find on mobile app marketplaces.

This interoperability between mobile and desktop computing is key to Ubuntu as a successful smartphone OS. Shuttleworth imagines devices that will cross the limitations of today's smartphones, creating devices that can be docked to larger displays and input peripherals and behave like a PC when necessary. This is much the same vision BlackBerry CEO Thorsten Heins has the BlackBerry platform.

A significant point of difference is essential for kickstarting a new mobile ecosystem at this time. Apple and Samsung are ruling the sales charts, leaving little for the other major players. To get Ubuntu off the ground, Canonical will need a strong manufacturing partner, or three, which represents a significant risks for the OEMs struggling to make sales with Android.

In its favour, the telcos are still hungry to find a viable third ecosystem to support; one the carriers can exercise some control over in a way that is impossible with iOS. With Windows still slow out of the gate and the future of BlackBerry uncertain, perhaps Ubunto is the third we've all been waiting for.