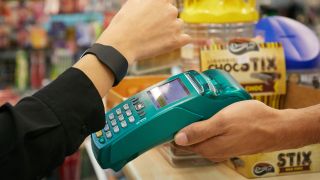 Apple Pay may be officially available in Australia, but thanks to its restriction to American Express cards, it can hardly be considered ubiquitous.

And while Google has confirmed Android Pay is arriving this year with local bank support, there still a lot of opportunity for mobile payments to take off before then.

Optus recognises this, and has today launched a range of accessories for its Cash by Optus platform, which will turn your smartphone into a Paywave-compatible device for cashless payments under $100.

Optus' new accessory lineup consists of three different options. The first, which is mostly for iOS users but will also work on Android, is an NFC-enabled "Optus Sticker", that brings mobile payment options to almost any device.

Attaching to the back of your smartphone, the sticker pais with the Cash by Optus app and lets you use your phone as though it were a contactless credit card.

The third option, and perhaps the strangest, is a dedicated NFC wristband, which allows customers to make payments without using their phone at all. The Cash by Optus band is designed for joggers who want to leave behind their phone or wallet, but still want the freedom to buy stuff.

Give Optus your money and then spend it

By comparison, Apple Pay and Android Pay will connect directly with your bank account, allowing you to spend your money without an interim step along the way.