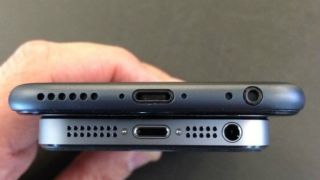 iPhone leak season is upon us and the downpour has well and truly started. However this time it seems Apple is having even more difficulty keeping the seal shut.

The latest comes from Italian blog Macitynet.it, which compares an iPhone 6 dummy unit against the iPhone 5S in a series of photos and a video.

The dummy unit, supposedly obtained from insider source, aligns with many of the leaks and rumours we've already seen.

We can see a larger, 4.7-inch screen and a curved design that's more alike to the iPod Touch, while the power button now sits on the side of the device.

Overall, it would mark the most significant change to the iPhone design yet if it's accurate – and that's a big if. While it's claimed to be a dummy unit, this iPhone 6 mockup could just as easily be fake.

Last week, the same site put the iPhone 6 unit side by side with a display model Samsung Galaxy S5, showing that an iPhone of this design could be a tad shorter and thinner than Samsung's effort.

The questionable aspect right now is the flash. As far as we can see, the true tone flash is missing. However there appears to be a silver ring running around the outside of the lens - possibly the ring flash that has been mooted for the handset.

Watch the video below and see whether you'd be happy with Apple releasing an iPhone of this design.