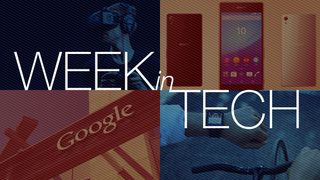 It's been a weird week in our world of tech: Sony's latest smartphone launch was more apologetic than awesome, Google made it possible to see everything we've ever searched for with predictably hilarious results, and scientists have found a way to spot trolls before they start trolling. Who's that trip-trapping over your bridge?

When is a launch not a launch? When it's a Sony flagship smartphone launch. The Xperia Z4 has been released quietly in Japan, with none of the fanfare we've come to expect from smartphone launches. While it's available on Sony's home turf "later this summer" there's no word of an international release. When – and we hope it's when, not if – it happens, Sony might keep it so quiet that nobody notices. That's a shame, because it appears to be a perfectly good evolution of a really nice phone.

Android Wear gets closer to the Apple Watch

The Apple Watch starts shipping this week, but its rival Android Wear is a moving target: this week it got an update that makes Android Wear watches even more compelling. There's an always-on screen for apps as well as faces, Wi-Fi support (if the watch has the hardware) and emojis too. The update has already started to roll out and should reach all Android Wear watches in the next few weeks.

Are emotions the next big Apple thing?

Never mind fitness tracking: devices such as the Apple Watch could monitor your emotions. That's what Jamie Carter says, and he's got the experts to back him up. They're careful not to over-hype the potential, but it's clear that computers will soon be able to know more about us than ever before. The big question is, do we want them to?

Good news for mobile workers and Starbucks-based Netflix binge viewers: public Wi-Fi is about to get a whole lot faster, and by "a whole lot" we mean "10 times". Researchers at Oregon State University have invented a new LED-based technology that delivers up to 10 times more bandwidth, and it's called WiFO. While it has the same peak speed as existing users, it would deliver at least 50Mbps per user instead of the piffling speeds we're used to in public spaces. It can't come soon enough.

Now you can Google your past

File this one under "what could possibly go wrong?": Google has made it possible to download an archive of every single thing you've ever searched for, if you browse while logged into your Google Account and don't use private browsing. As Kate Solomon says: "Your Google Search history can be quite revealing – it's not something you want your parents or potential mates to ever read. Every minor but embarrassing ailment you've ever had, every terrible film, questionable celebrity crush and vaguely illegal activity you've ever looked into laid out like a map around your psyche."

About that 2015 launch for the Oculus Rift VR headset: it ain't gonna happen. Speaking during Facebook's quarterly earnings call, Oculus's new owner confirmed that the Rift won't have "large shipment volumes" this year. Facebook tech boss Mike Schroepfer has clarified a previous comment: when he said VR would be coming this year he meant VR-capable hardware, not the consumer version of the Oculus Rift.

Facebook's new app, Hello, wants you to say goodbye to your Android dialler: it's a free app that enables you to make free voice calls over Wi-Fi, and the latest attempt by Facebook to keep you locked in its warm and faintly sinister embrace. Not that most of us need much encouragement: the latest Facebook stats say that it has 936 million active daily users sending 45 billion messages and watching 4 billion cat videos a day.

Bad news for the kind of troll that doesn't live under a bridge and threaten goats: US researchers are working on troll-busting algorithms in a kind of Minority Report system to predict outbreaks of idiocy. The researchers have discovered that the internet's mouth-breathers write in a completely different way, and they've built a model that can predict with 80% accuracy whether a user would go on to be banned based on reading just five of their posts. They also found that tough moderation made trolling worse, and "a light touch was more effective than throwing out the banhammer."