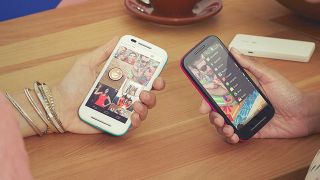 In 2009, a battle line was drawn. One that would create deep divides in the smartphone world, even within brands themselves, and will have a significant impact on the next phone you'll buy.

What happened back then? Smartphones got good. Processing power reached the point where you didn't have to choose between spending a year's salary and having a decent experience browsing the web on the go, opening up the tech to a wider range of users.

As you'd expect over the years, that performance has been built upon to give us octa-core handsets with more RAM than a over-zealous farmer, putting truly phenomenal power in our pockets.

But that line, the one that showed a baseline of 'acceptable smartphone performance' has translated into phones that cost hardly anything to produce and could lead to the biggest change in the smartphone market to date.

And it's not just the lesser-known brands that are championing this cause either: with the launch of the Moto E, Motorola has proved that the bigger brands have realised the true value in making a smartphone that's within financial reach of as many as possible.

Samsung has a similar view: while the company is pushing hard to convince the world that its flagship Galaxy S5 is the phone most should own, the company is looking to launch its Tizen handsets into more nations where lower cost phones are more popular, like Russia and India.

The reason for the shift is simple: the high end smartphone market is stagnating, with smartphone shipments actually starting to decline in countries like Japan (according to researcher IDC) as saturation levels kick in, users embedded in two year contracts who understandably don't need to buy another handsets.

So connecting the next wave of smartphone users has become crucial if sales are to continue – and the best way to do this is to entice users on price.

This is already happening, with the average price of a smartphone practically halving from $450 in 2012 to $260 by 2018 – which means the profit margins of the big brands are going to get hit hard. The only way to keep high revenues afloat is to increase the number of handsets sold, and that means attracting more and more users the smartphone pie.

What is a cheap smartphone?

There are two strands to the 'cheap smartphone' sector that will have a big impact on the success of brands like Samsung, HTC and Apple in the years to come.

The first is the reasonably-priced smartphone for the developed nations with high smartphone penetration, something that offers a similar experience to the likes of the iPhone 5S or Galaxy S5 but without the hefty cost.

That's where companies like Motorola and Nokia are targeting, and it appears to be working: Moto went from almost no presence in the UK to taking nearly six percent of the market according to Kantar World Panel with the Moto G, which offered impressive performance for a fifth of the cost of a top-end Android handset.

Nokia's Lumia 520 managed a similar feat worldwide, proving popular in both Western and developing nations to become the top-selling Windows Phone on the market, and doing so at a price around 25% of the cost of a flagship phone.

This section of the market is going to get quickly filled with brands from Asia muscling in, able to offer low cost, high quality handsets thanks to a focus on specs over headline features.

"Motorola was nowhere in Europe before the Moto G launched in November last year, but the new model has since boosted the manufacturer to 6% of British sales," said Dominic Sunnebo, strategic insight director at analysts Kantar Worldpanel ComTech.

"It highlights the speed at which a quality budget phone can disrupt a market. The same pattern can be seen in France with Wiko, which has 8.3% share, and Xiaomi in China with 18.5%."