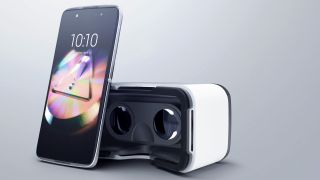 Alcatel's launched a duo on new flagship Idol handsets at MWC 2016 in Barcelona, and while the phones themselves are unlikely to worry the likes of Samsung, LG and co. - they do pack a rather intriguing party trick.

It's not the handsets themselves which are the main attraction though, it's their packaging which holds a surprise. The box transforms into a pair of VR goggles.

The phones come pre-loaded with the OneTouch VR Hub, which has a host of VR content ready for download, although the selection, pricing and quality of the offerings are currently unknown.

Both handsets also pack a 'Boom key', a button which Alcatel claims enhances everything from the UI and sound to the camera and gaming.

Boom button usage includes triggering burst capture from the camera without having to unlock the phone and boosting bass, volume and clarity of audio during music playback.

You also get the latest Snapdragon 820 processor, 3GB of RAM, 8MP front camera, a microSD slot and Android 6.0 Marshmallow on both handsets.

There's currently no word on release date or price for either, but keep an eye out for our hands on reviews.