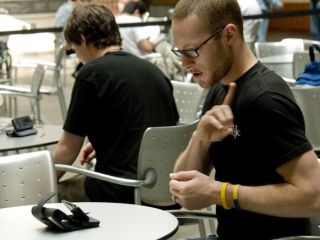 US scientists are developing sign language tech for smartphones

A team of American scientists is developing technology to enable sign language via smartphones, for the deaf and hard of hearing.

Engineers at the University of Washington have developed the first device that can convey American Sign Language over US mobile networks.

Phones for the deaf

"This is the first study of how deaf people in the United States use mobile video phones," said project leader Eve Riskin.

The device optimises the image clarity around the face and the hands, with scientists claiming that the data rate is down to a viable 30Kbits/sec.

The tech is called MobileASL and can also detect when either person is signing, with phones switching off broadcast mode when they are not in order to increase battery life.

"The point is to provide real-time video cellular communication for deaf people," says Jessica Tran, a doctoral student working on the mobile ASL project. "We are able to send video over both 3G and Wi-Fi networks at a very low bit rate."

The tech is currently being tested out with 11 participants using it in their daily lives and reporting back to the development team.

"We know these phones work in a lab setting, but conditions are different in people's everyday lives," Riskin said.

"The field study is an important step toward putting this technology into practice."